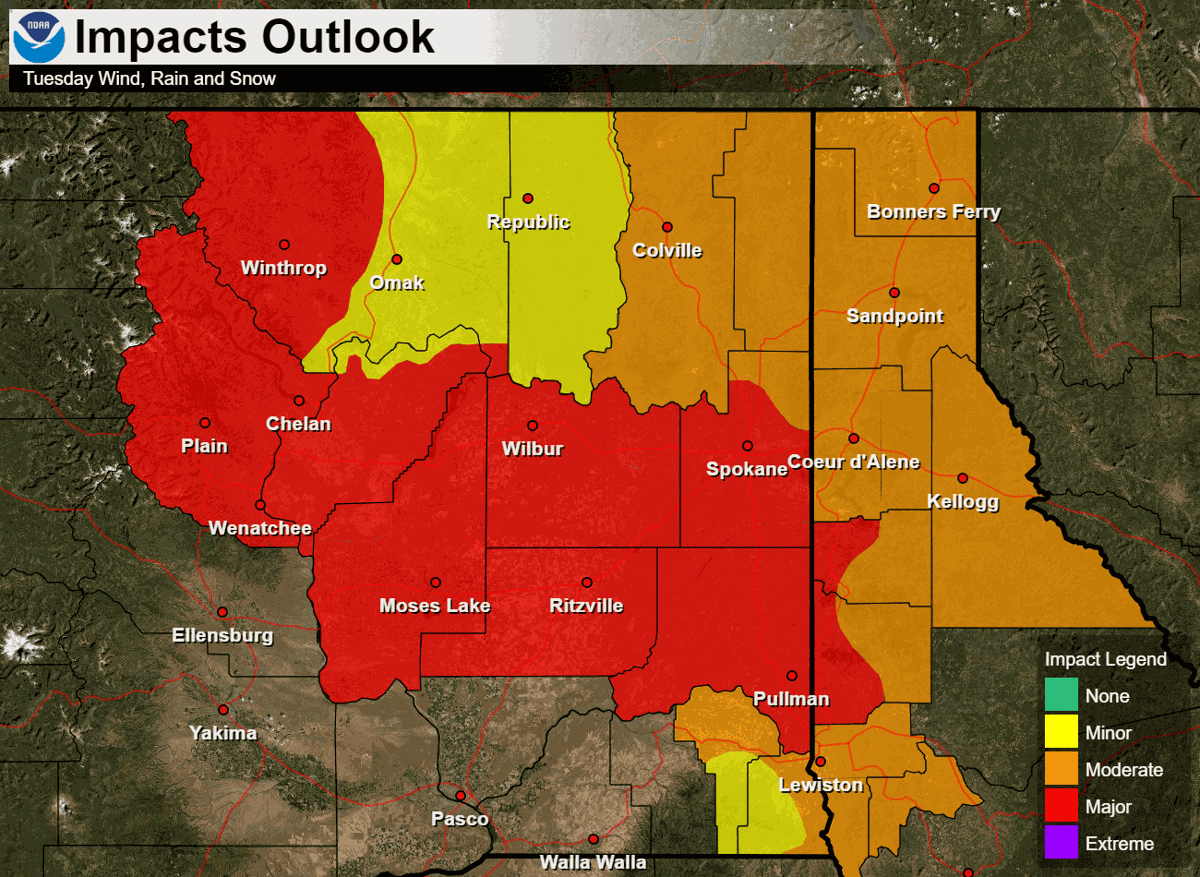 Wind gusts in Wenatchee could reach up to 65 mph on Tuesday, according to the National Weather Service. 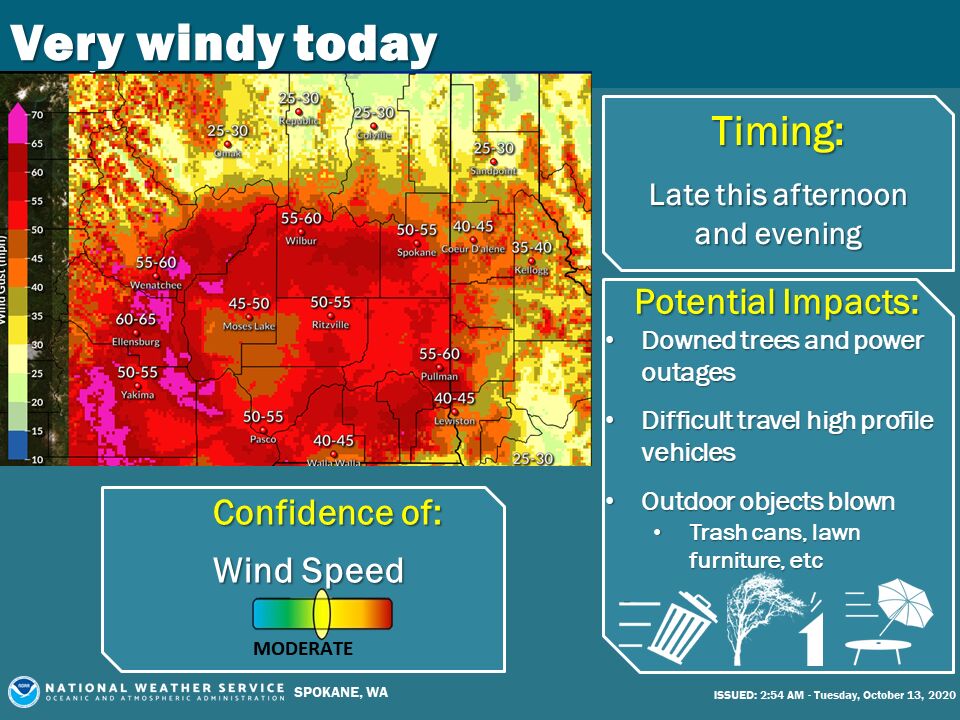 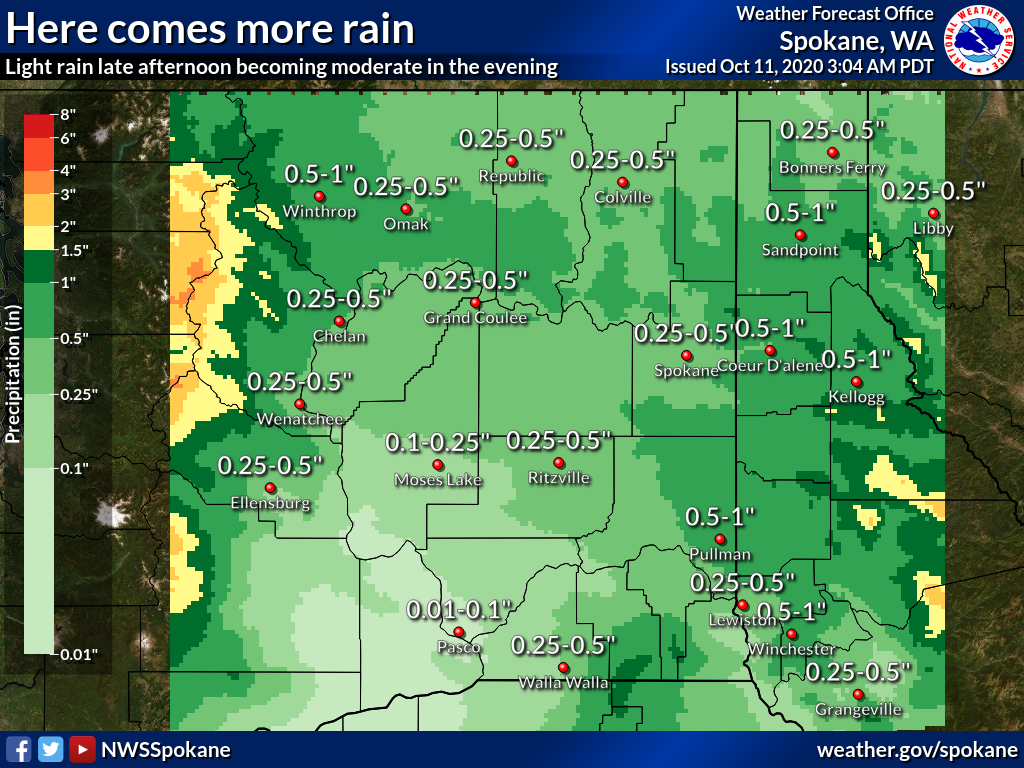 Up to a half-inch of rain could fall in North Central Washington this week.

Wind gusts in Wenatchee could reach up to 65 mph on Tuesday, according to the National Weather Service.

Up to a half-inch of rain could fall in North Central Washington this week.

WENATCHEE — The National Weather Service has issued a high-wind warning starting Tuesday afternoon for much of North Central Washington.

The winds could blow down trees and power lines, cause difficulty for travelers and make small objects airborne, according to a NWS report. Winds for Wenatchee are expected to be between 25 mph to 35 mph, with gusts from 50 mph to 65 mph.

It is hard to say if Wenatchee itself will get the strongest winds since the conditions will be spread out across the region, said Joey Clevenger, meteorologist for the Spokane NWS.

Winds in burn scar areas, such as the Waterville Plateau, can blow dust and ash when they reach 35 mph to 40 mph, he said. Recent rainfall in the area may limit that issue.

People should check the weather before going outside, she said. Lakes can get choppy. A lot of times outdoor objects like lawn furniture or umbrellas can get thrown around by high winds.

The NWS advises people to stay indoors and avoid forested areas during the windy weather. The high-wind warning will be in effect from 2 to 11 p.m. Tuesday. Rain will also be a factor.

Wenatchee saw only trace amounts of rain last week, she said. A quarter- to a half-inch of rain is expected this week.

NCW should be getting “a decent amount” of rainfall, she said.

People living near burn scars should “really be vigilant about watching those burnt slopes,” he said. Without vegetation on burnt slopes, water runs off, taking rock and debris with it.

The forecasted rain with strong winds are ideal for falling trees, he said. When the ground saturates and fills with moisture, more trees often fall down.

PUD spokesperson Rachel Hansen encouraged people to plan ahead for autumn’s unpredictable weather. When it comes to power outages, folks should turn off all of their appliances and electronics, with the exception of one light, so repair crews can see when power has been restored, she said.

It is also good to keep devices like phones and laptops fully charged in anticipation of harsh weather, she said. People should make sure their devices are only plugged directly into a generator if they are using one.

Chelan County residents can call the PUD to report outages or any suspicious looking power lines at 877-783-8123. Douglas County PUD customers can call 884-7191.