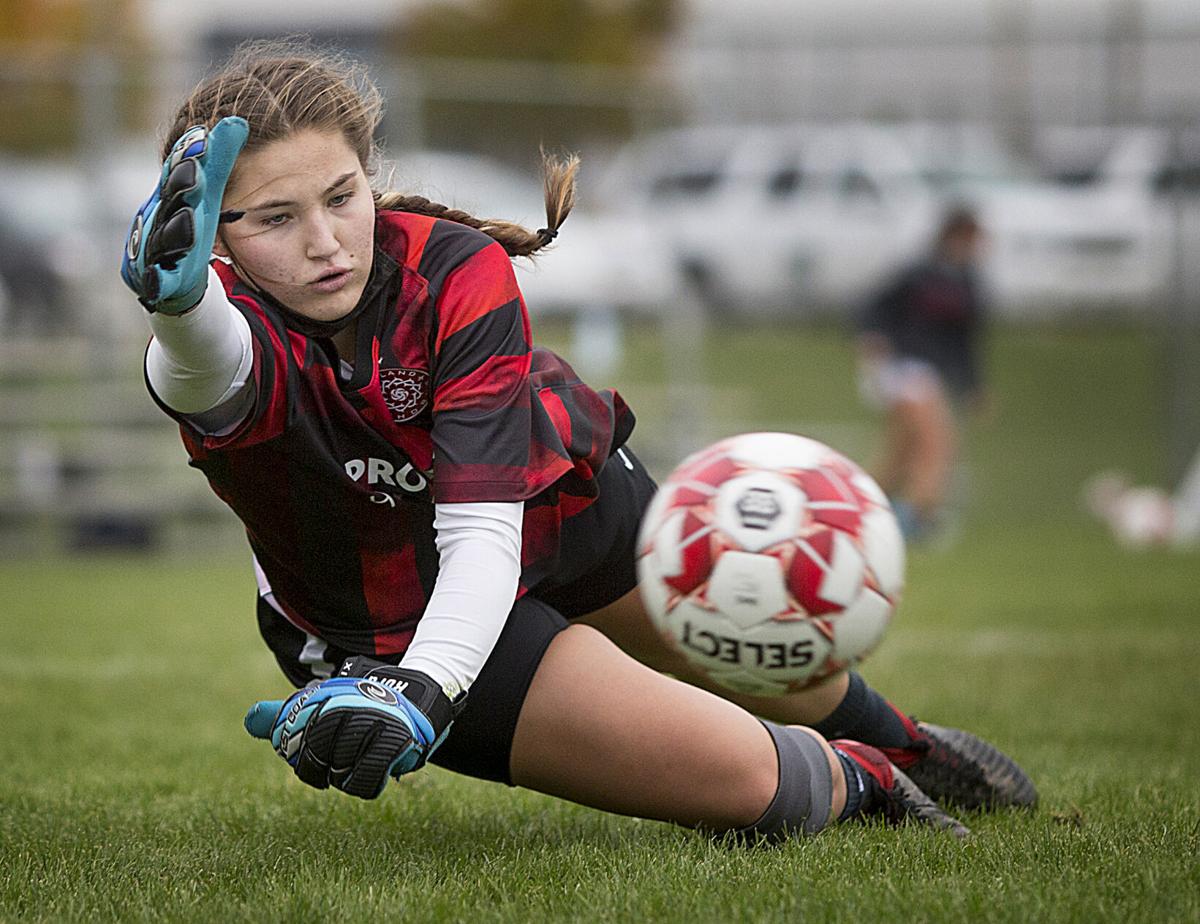 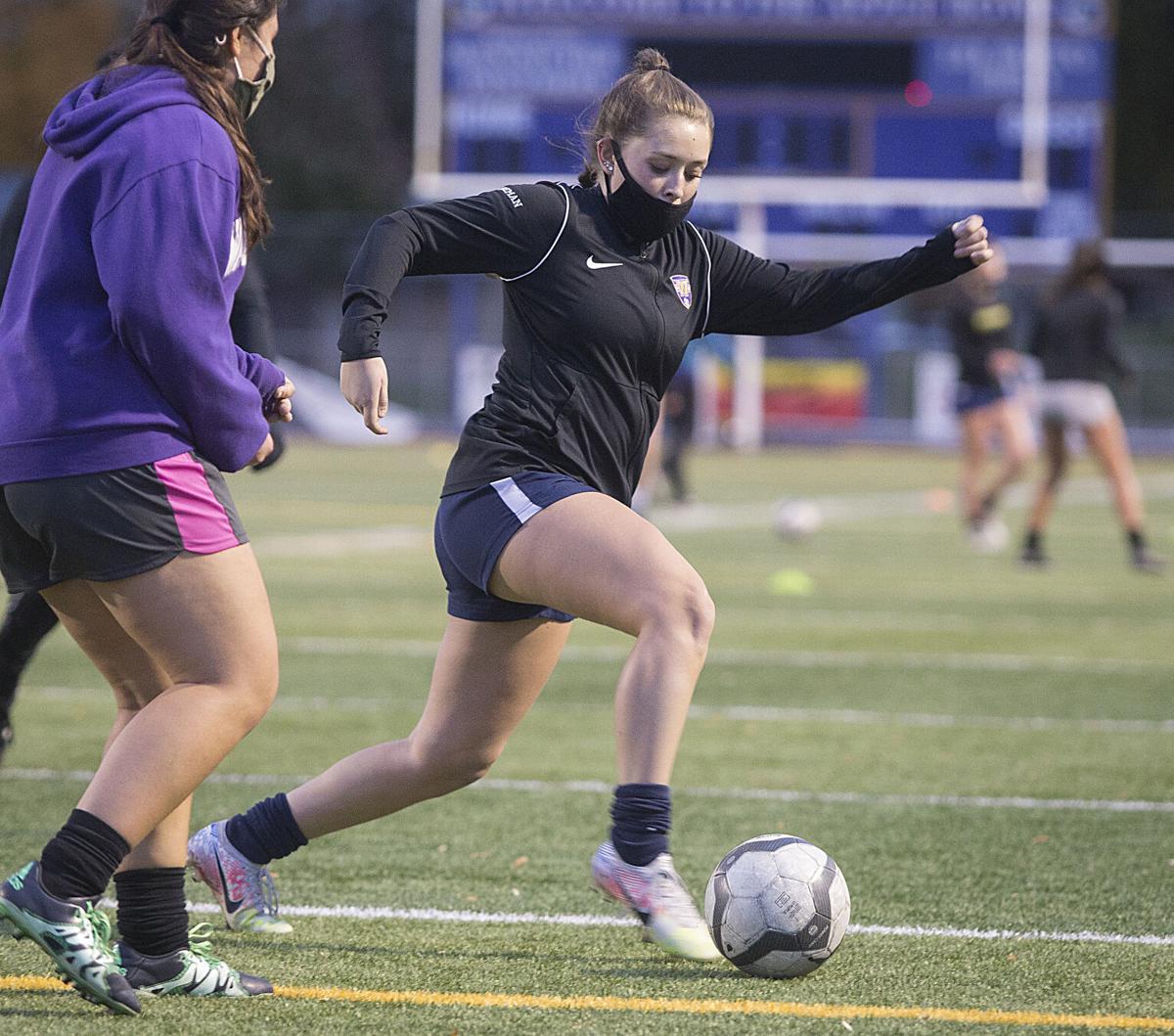 Wenatchee's Halle Stegman, who won first-team all-league soccer honors last year as a sophomore, practices in the Apple Bowl during an open coaching session in November. Wenatchee opens its season Saturday against Eastmont at home. Kickoff is at 2 p.m. 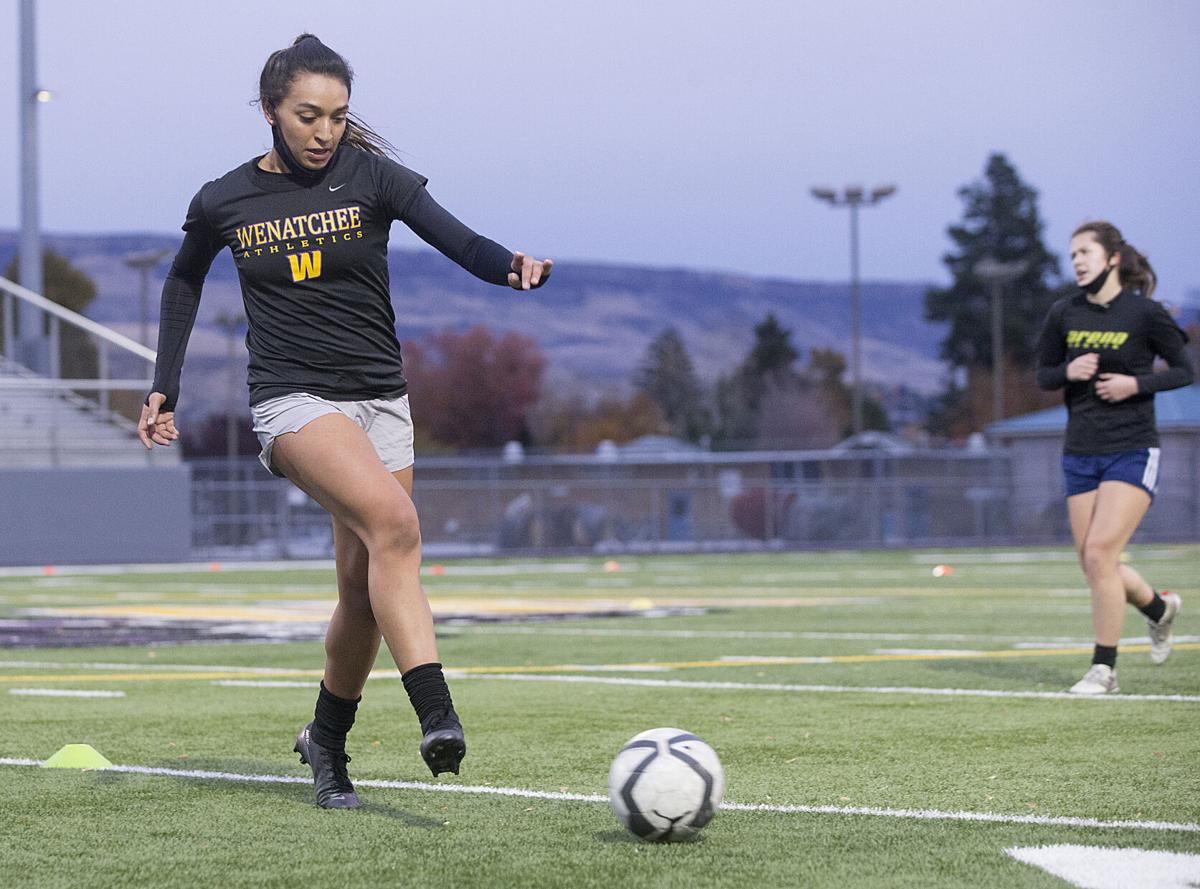 Yareli Sanchez-Blanco is the one of a few seniors on Wenatchee soccer team this year. The Panthers open up their season against Eastmont at Apple Bowl on Saturday, Feb. 27. Kickoff is at 2 p.m. 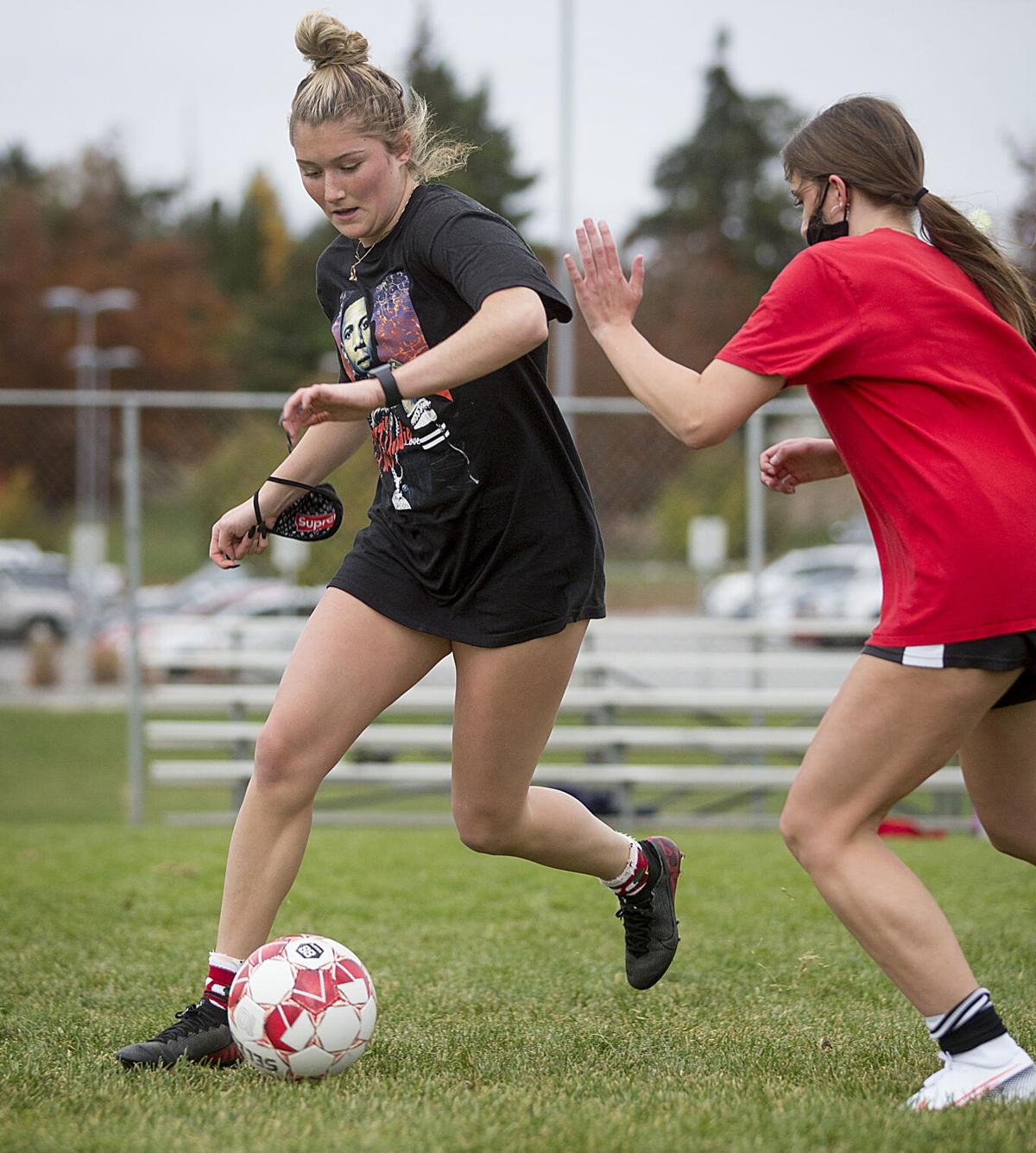 Wenatchee's Halle Stegman, who won first-team all-league soccer honors last year as a sophomore, practices in the Apple Bowl during an open coaching session in November. Wenatchee opens its season Saturday against Eastmont at home. Kickoff is at 2 p.m.

Yareli Sanchez-Blanco is the one of a few seniors on Wenatchee soccer team this year. The Panthers open up their season against Eastmont at Apple Bowl on Saturday, Feb. 27. Kickoff is at 2 p.m.

The first day of soccer practice for both Wenatchee and Eastmont girls soccer teams was pure bliss.

After months of being cooped up inside while avoiding large numbers, both teams have been able to get out on the field, stretch their joints and kick a soccer ball around for a few hours as open coaching for fall sports began last week. The period for fall sports ends Nov. 16.

“It’s been amazing,” Wenatchee first-year head coach David Vasquez said before practice on Thursday. “The girls realized how much they miss soccer. Just walking around the first day, they sat on the turf for a while. And one girl commented how nice it felt. You know when you go home and find little pieces of turf in your shoe, you forget how much you hated that, but it’s also a reminder that you are out there again. And that’s a great feeling.”

The girls have to split into pods of six; there aren’t any live scrimmages, but the drills they’re able to do are similar to what the girls would be doing during a regular season. And in Vasquez’s opinion, just being able to get on the Apple Bowl and compete has been a huge boost to the girl’s social-emotional well-being.

“Just to see them interacting with one another and their energy, you can tell they love being out there again,” Vasquez said. “And it’s been easy to feed off of.”

Vasquez, who normally assists Dennis Tronson with the boys' squad in the spring, said he’s been itching to get out there as well since his spring season was cut prematurely.

Eastmont head coach Vidal Hurtado, now in his second season leading the girls, is in a similar boat. His Wildcats were poised to compete for a state title in the spring.

“I love it,” Hurtado said Thursday. “I really look forward to our training days and it’s nice to make those connections with the girls again. I know they enjoy seeing their friends, and it’s a good place to be. We miss the competition big time, but this will suffice.”

While both coaches said they’re focusing practices on fine-tuning agility, conditioning and technical work on the ball, they realize their time is limited. And the season won’t start until March.

So while they both feel confident in their squads, the girls will have to hold themselves accountable to stay fit over the next four months.

“They need to stay ready so we don’t have to get ready,” Vasquez said. “When the season and tryouts begin, we need to hit the ground running instead of wishing we did things during the offseason. I just hope we have the opportunity to showcase what we have. Because we have a very talented group of girls that are hungry.”

With only a couple of seniors lost from last season, the Panthers return most of their backline and keeper Nyah Hughes, who Vasquez called the best in the Big 9.

“We have returning defenders who allowed some of the fewest goals in the league and Hughes is amazing,” Vasquez said. “We have some midfielders who are skilled with the ball and I’m excited to see what our forwards can bring.”

Over the summer, Vasquez and his coaching staff put together an offseason training program with dribbling, juggling, passing and other soccer-specific drills that he made available for the team. The girls will be able to access that over the winter if they want to keep training and track their progress.

“We can’t mandate anything out of season, but we’ve been focusing on what they want out of the season? What do they want to experience when they come back?” Vasquez said. “I keep repeating this equation to them (E+R=O). Events — like COVID-19 or maybe getting put on JV — are out of your control; Response (how are you going to respond to it) determines the Outcome. So it’s more a hammering of individual responsibility.”

“And just from watching the girls last fall, I can already tell who put in a significant amount of time working on their game. It was evident in the first practice last week.”

Hurtado feels the Wildcats are in a solid place heading into the season. They’re returning both leading scorers from last year, Megan Chandler and Jayden Brown, and have a skilled group of underclassmen.

“I feel great to be completely open and honest,” Hurtado said. “This group of girls could do something special if we have a season. I just hope they get to showcase their talent for the community, their families and also themselves.”

Like Vasquez, Hurtado said he’s planning to give the girls drills they can do on their own over the next four months. But it will be their onus to do the work.

“It’s going to be tough for some of the returning girls to keep their spots because we have a very skilled group of freshmen coming up,” Hurtado said. “So they’ll have to stay on edge, especially with only an eight-week season. If we get one week to practice and then games, the girls will need to be ready to go by the time the season starts, but they know that.”

NCW Preps | Next Up: Wildcats sink Mountain Goats with pair of wins Saturday