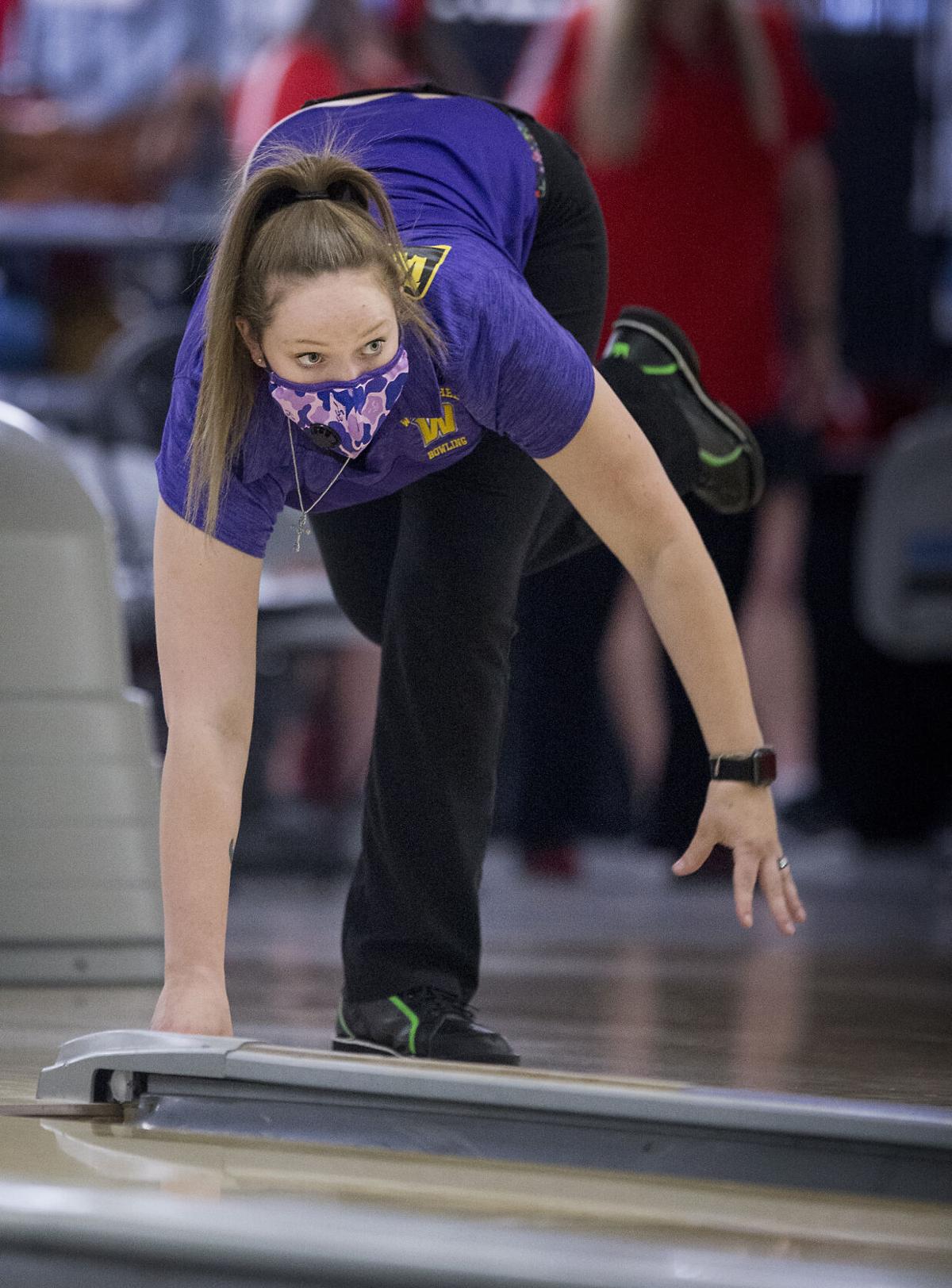 Wenatchee's Kayla Musgrove catches herself and watches her bowling ball hit the pins in her team's match against Eastmont at Eastmont Lanes on Wednesday. For a short video, see The Wenatchee World's Facebook page. 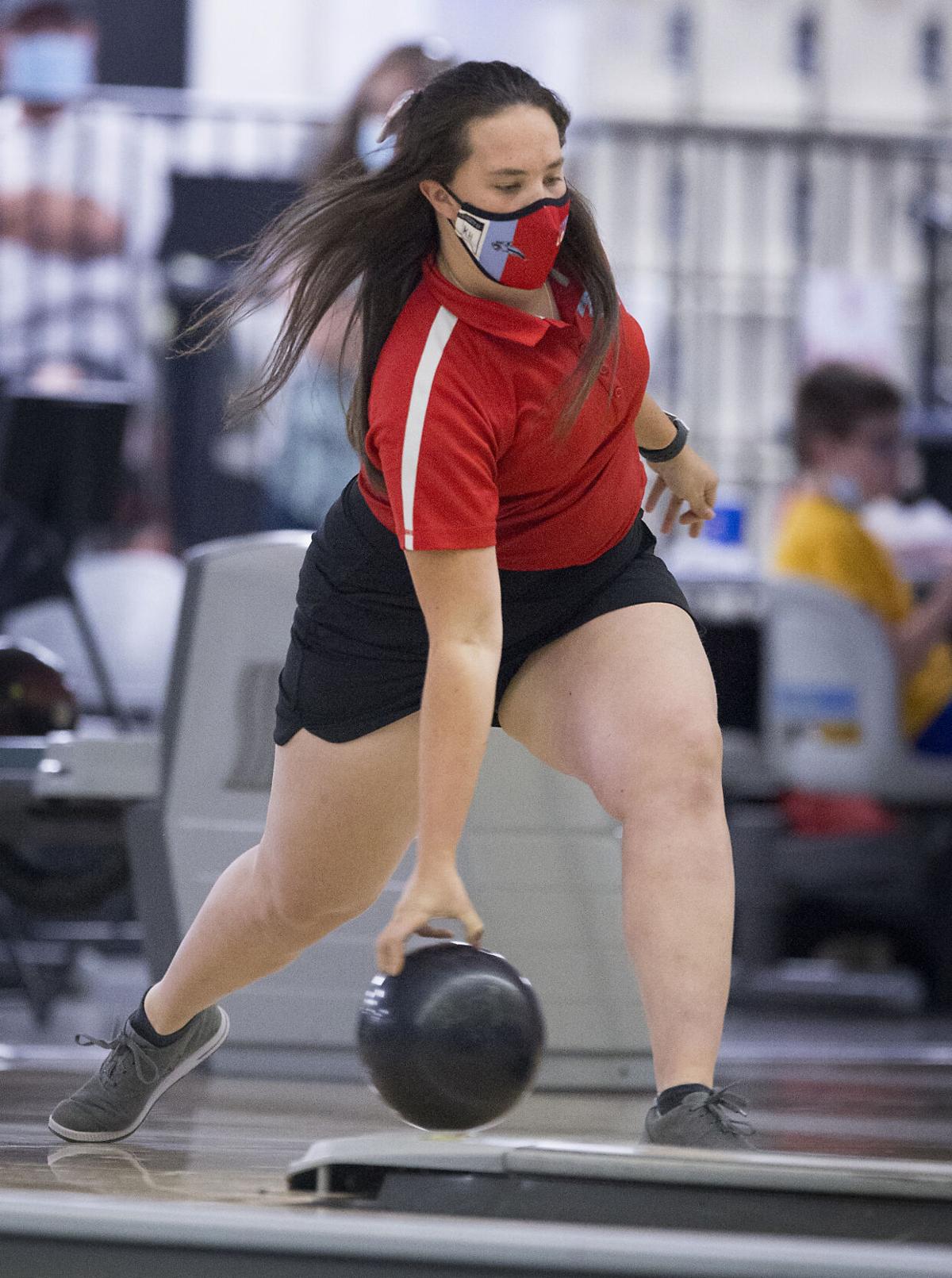 Eastmont's Katie Heinz rolled a 200 during the first game of her team's match against Wenatchee on Wednesday.

Wenatchee's Kayla Musgrove catches herself and watches her bowling ball hit the pins in her team's match against Eastmont at Eastmont Lanes on Wednesday. For a short video, see The Wenatchee World's Facebook page.

Eastmont's Katie Heinz rolled a 200 during the first game of her team's match against Wenatchee on Wednesday.

EAST WENATCHEE — The bowling alley wasn’t standing-room-only Wednesday afternoon, as it customarily is during a Wenatchee-Eastmont bowling match, because of capacity limits. But the fans that were present were treated to a show.

The strikes were plentiful and the games tight as both teams battled for bowling supremacy in the valley.

After splitting the first two games, Wenatchee won the third to take the match behind senior Kylah Hankins, who rolled a season-best 240.

“Eh, she did OK,” Wenatchee head coach Jeremy Anders teased, with Hankins standing behind him in earshot. “I think she really needed this and I’m sure it meant a lot to go out in her final match against Eastmont with a 240.”

Hankins shouldered a bulk of the load in that third game, but the Panthers had their best game of the afternoon as well. Mackenzie Munro bowled a 179, Kayla Musgrove a 162 and Cami Carter finished with a 157.

Eastmont also saved its best team performance for the final game; they just didn’t have a score to match Hankins’ 240. Still, senior Alivia Ellington and Colby Hall each rolled a 177, Katie Heinz bowled a 161 and Madelyn Eaton finished with a 147.

“I thought it was a good match overall and this is how it should be,” Eastmont head coach Christy Binge said. “It should come to the last game when we play each other. Kylah had a great final game and you can’t beat that.”

The Panthers jumped out to an early lead in the first match but Eastmont erased a 40-pin deficit over the final three frames — thanks in part to Heinz, who rolled a match-high 200 — to pull within 16 pins. Wenatchee held on to win the first match 650-634 behind Munro’s 184.

Binge switched up her lineup in between games, a savvy move that bore fruit as inserts Madelyn Eaton and Ellington led the team with a 194 and 166 respectively. Hankins (179) was the only Panther to bowl over a 150 but Wenatchee was able to finish strong to build momentum heading into the third.

“We were able to stay loose and even though things got tight and a little crazy, we popped back up in the last game,” Anders said. “They knew what was on the line. Since we only have eight matches this season and no state or anything I felt like this was the state tournament for both teams.”

Both Hankins and Munro rolled a turkey — three consecutive strikes — to open up the final game, which pretty much set the tone for the rest of the match. As a team, Wenatchee had strikes on five of their first eight frames. Munro bowled a second turkey midway through the match and Hankins rolled strikes on five of her final six balls to finish with the 240.

Next up: Both teams will have the Memorial weekend to practice before getting back on the lanes next Wednesday. Eastmont travels to Selah while Wenatchee heads to Ellensburg. First ball in both matches is at 3:30 p.m.

Panthers shine in final home quad against Ike and Davis