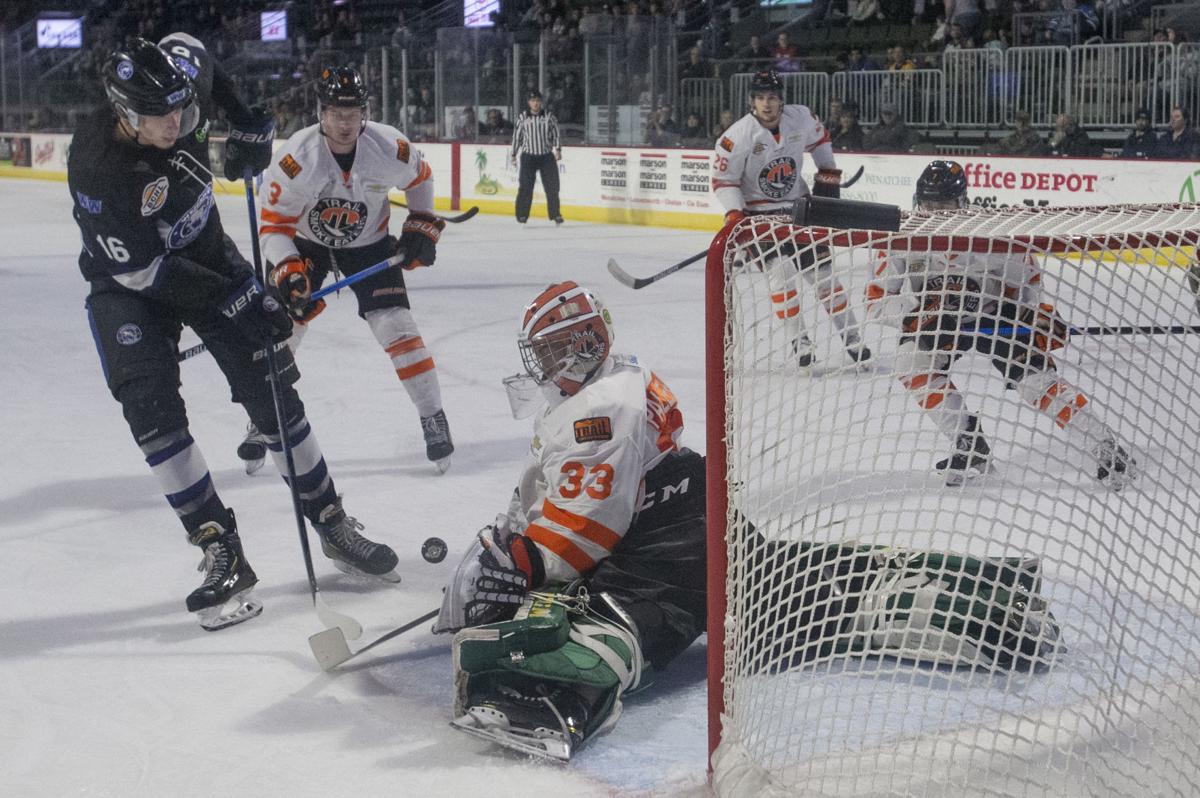 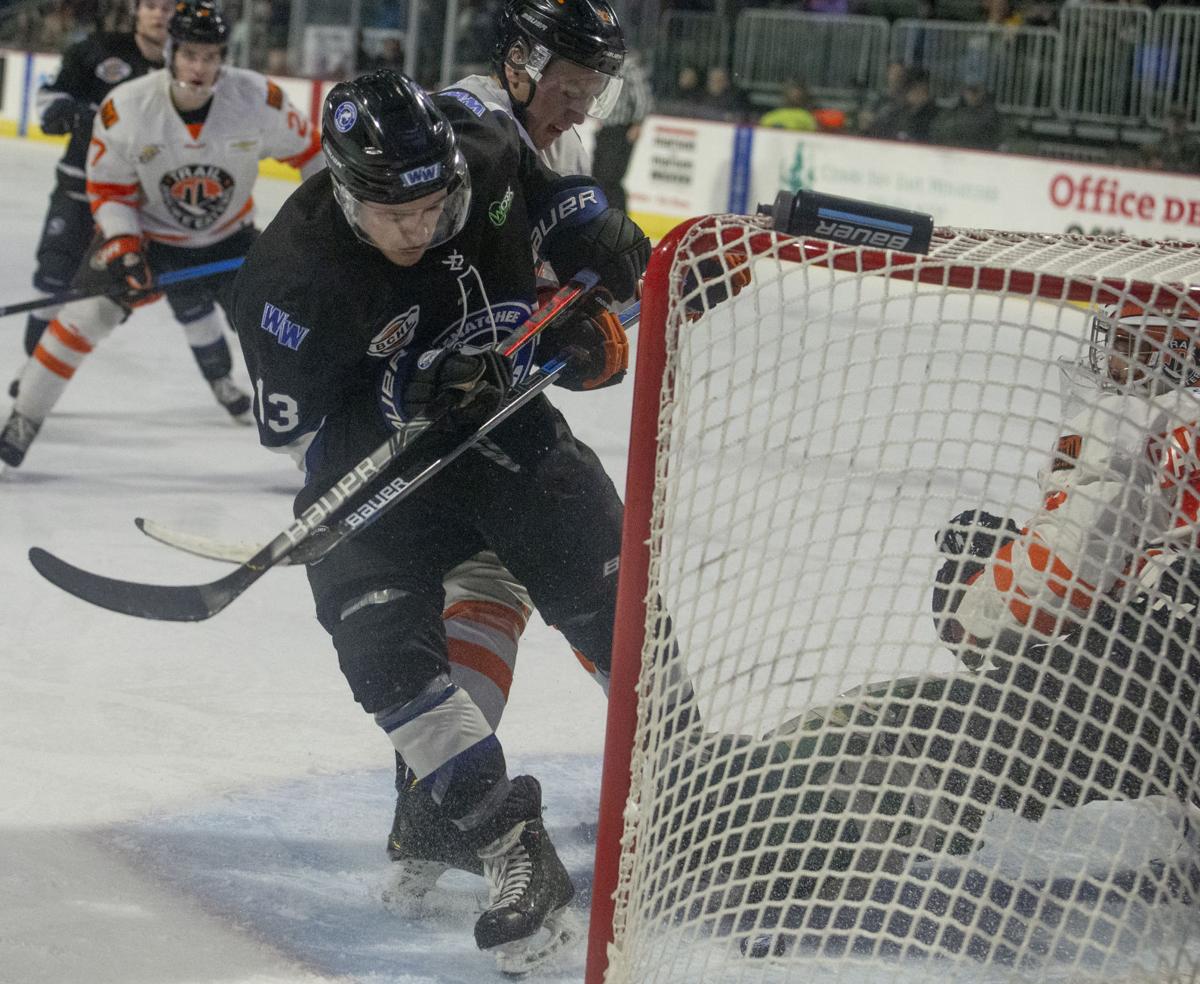 Luke Ormsby looks down at the puck as it gets by the Trail goalie for a score in the second period. Wenatchee Wild vs. Trail Smoke Eaters hockey. Trail won 4-3. 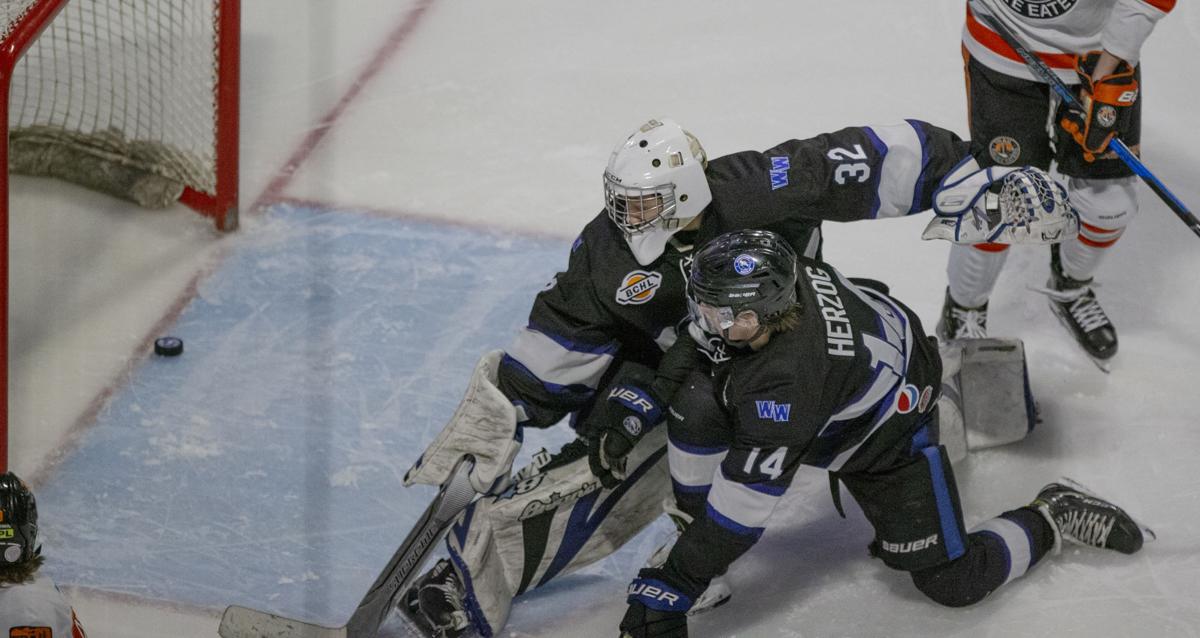 WENATCHEE — Most nights when a team outshoots another 27-17 and gets seven power-play chances, they are going to win the game. However, hockey can be a cruel game in that respect as the Wenatchee Wild dropped a 4-3 game to the Trail Smoke Eaters on Friday night at the Town Toyota Center despite out-shooting them by a wide margin.

Trail came into the game as having already secured a playoff spot as the second-place team in the Interior Division. They also boasted the top three scorers in the conference.

It started off great for the Wild in the first period as Wenatchee cashed in on a power-play chance at 12:51 as Brian Adams scored his 19th goal on a wrist shot in front of the goal, assisted by Dylan Herzog and Sam Morton.

It would be the only power-play goal on the night for the Wild. Wenatchee led 1-0 when less than a minute later, at 13:25, Harrison Scott scored his 13th goal on a breakaway to put the Wild up 2-0. He was assisted by Luke Ormsby and Nick Cafarelli.

However, toward the end of the period, the league’s leading scorer, Kent Johnson struck for his 34th goal of the season at 17:20 to cut the lead to 2-1. Trail did not wait long into the second period to tie the score.

At 21 seconds, Matt Osadick scored a power-play goal to tie the game at 2-2.

Wenatchee would come right back to retake the lead as Luke Ormsby took a perfect feed from Cafarelli for the score at 11:30.

That gave the Wild a 3-2 lead. It seemed Wenatchee would head to the locker room with the lead, but with just three seconds left in the half, Phillippe Lapointe scored a breakaway goal to knot the score at 3-3.

Kent Johnson would strike again at 10:45 of the third period with his second goal, which gave the Smoke Eaters a lead that would not give up. Wenatchee had a late power play but they could not find the equalizer. The Wild lost 4-3. In the game, they went 1-for-7 on power plays.

“If we get good looks like that on most nights, we’re going to be a lot better than 1-for-7. Give their goalie credit. Give their team credit. I thought they cleared rebounds when we were getting close to pucks,” Clark said. “I thought we generated a whole lot of offense off the power play. 1-for-7 looks bad, but if we get that many looks on the power play, we’re going to score more than one.”

Wenatchee out-shot Trail 27-17. Clark said he is disappointed but also looking at the big picture.

“You play that well on most nights, you’re going to have success. For whatever reason, it didn’t go our way tonight,” Clark said. “When you out-shoot a team 27-17, you’ll win most nights. The puck bounced their way tonight and unfortunately, it did not bounce ours.”

Trail improved to 30-14 in the BCHL, while Wenatchee fell to 22-20. The two teams square off again Saturday night at the Town Toyota Center.

“I thought we played well. That’s the funny thing about hockey, sometimes it just doesn’t go your way. Overall, I was really happy with our game,” Clark said. “The nice thing is we don’t have to wait very long to get back after it. We get them on home ice tomorrow. Clean up a few things and stay with what we did and we should be good.”