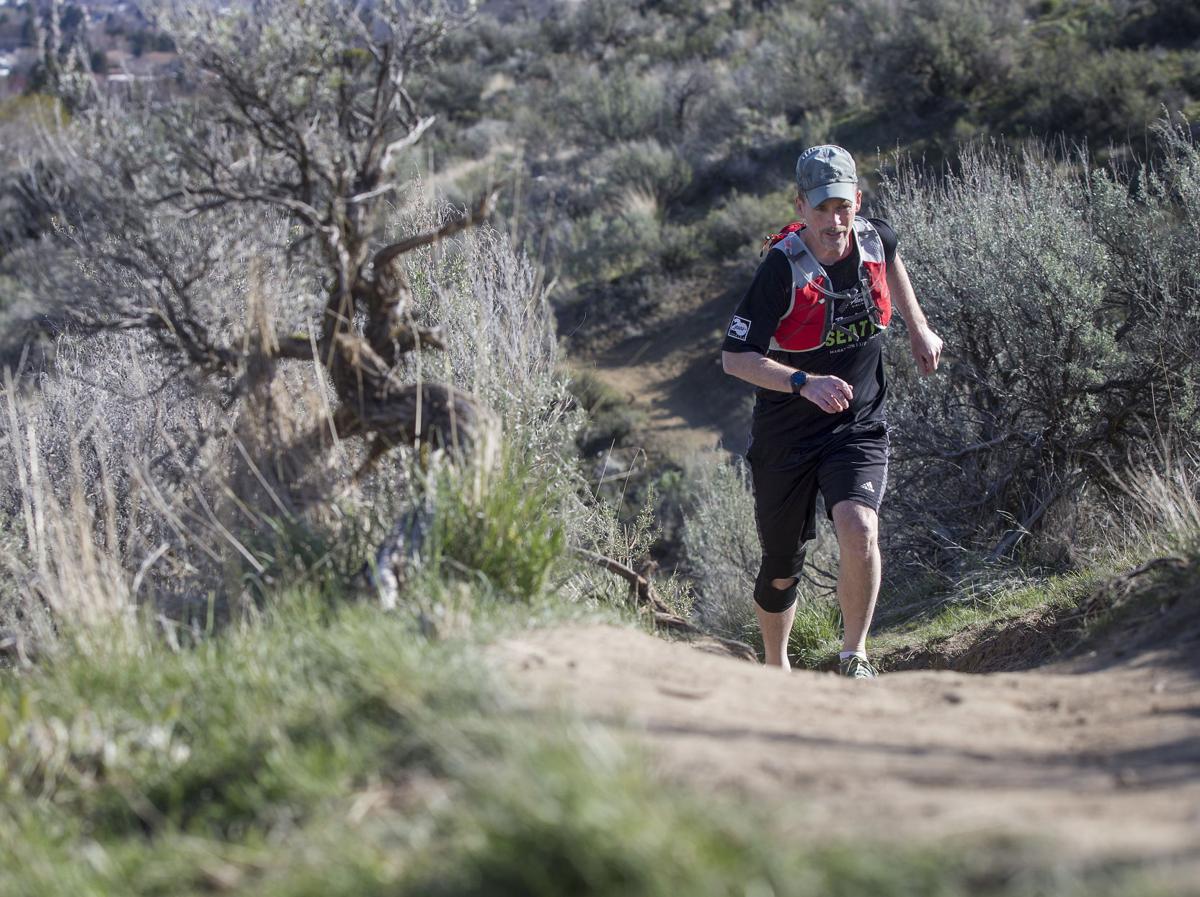 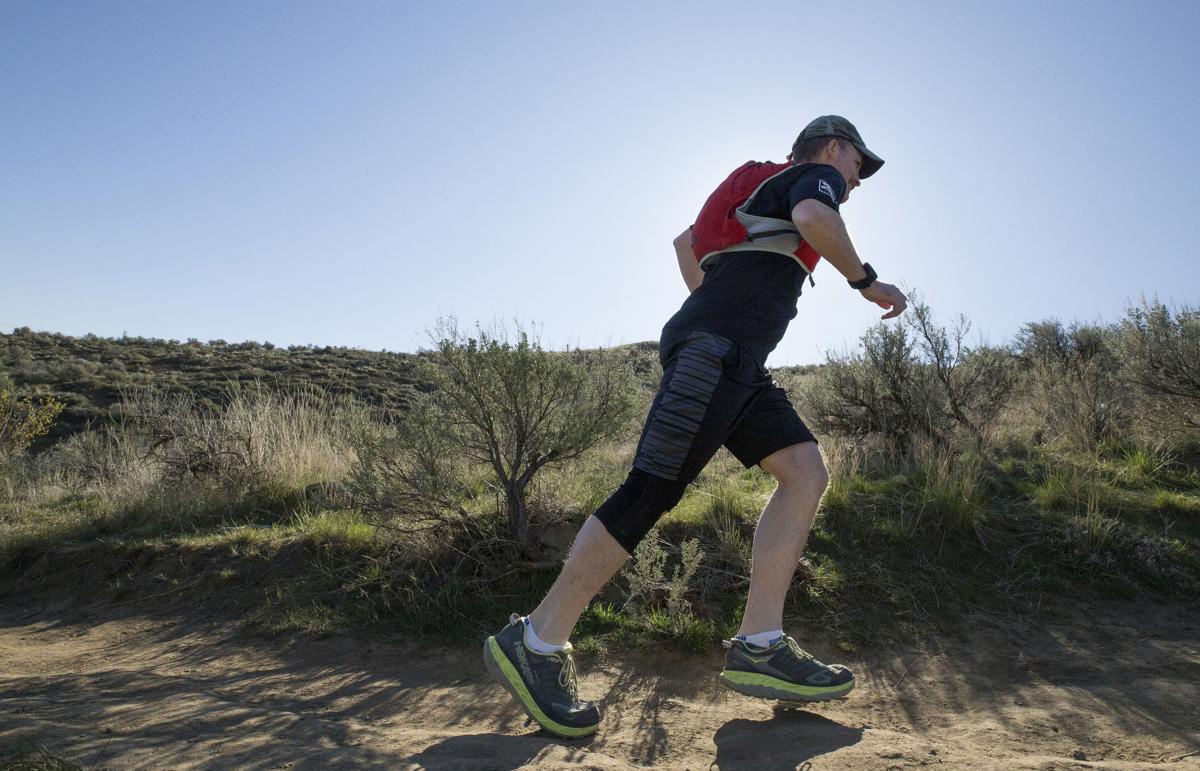 Jeff Permin, 53, has a routine he adheres to nearly every day of the year.

Either before or after a full day of teaching math at Pioneer Middle School, he runs — almost always on the trails and at times, very long distances.

It’s something he’s done just about every day since he was in 7th grade.

“I feel like if two days in-a-row go by and I haven’t run, I feel like I’ve lost,” said Permin, who’s completed four marathons and backpacked across several long-distance circuits around the globe, including the famous Annapurna Circuit in Nepal.

“Sometimes I’ll wake up at 4:30 a.m., walk my dog and then go on a run. If not, I’ll go after school,” said Permin, who even gets out during the winter, donning microspikes to get up the packed snow.

If it’s really snowy he resorts to a special pair of running shoes he drilled quarter-inch sheet metal screws into — something a friend turned him onto years ago — to help with traction.

“I just feel so much better and I like to stay in shape. But I also love using the time to think,” Permin said. “Running the hills when the stars are out, it’s an awesome time to just think and it’s relaxing.”

Permin, who said he can run from the Jacobson Preserve trailhead to the top of Saddle Rock in about 20 minutes, doesn’t keep to a standard distance every time he goes out. On a school-day, he’ll run somewhere between an hour to an hour and a half. On weekends, sometimes five to six hours.

“I have several spots on the ridges that sit in the sun and are protected from the wind that I like to stop and crash,” Permin said. “Sometimes I’ll stay for just five to ten minutes, sometimes I’ll sit there for an hour with a lot to think about. Just getting up there I like to be alone – though there are a lot of people up there now with all the gyms and parks closed.”

Growing up in Woodland, about 40 minutes north of Portland and in the shadow of Mount Saint Helens, the area was ripe with outdoor opportunities. But Permin said he owes his passion for running and the outdoors to his sixth-grade teacher, Mr. Erickson.

“He was the track coach and was an avid climber and backpacker,” Permin said. “He sort of took me under his wing. We were fairly poor (growing up) but he took me on my first climb up Mt. Hood when I was 15. I went on some backpacking trips with him and he got me to do track, so he gave me my start and I’ve just stuck with it.”

Sprinting has never been Permin’s métier. Even in his youth, Permin preferred the grueling distance runs or long backpacking trips. He excelled running long distances while serving as an infantryman in the Army.

“I’ve always been into distance running. When my daughter was 12 she could beat me in a sprint, but I’ve always enjoyed endurance running. Some people turn to alcohol or pills, for me, I like to run.”

Permin said he used to drop off though between mile 15 and 18, unable to push into the higher distances because his knees or ankles would ache. But after speaking with his orthopedist five years ago he made a switch in footwear, lacing up HOKA running shoes. He now uses them exclusively.

“My days of getting the cheapest pair of shoes at JCPenneys are over,” Permin joked. “But they’ve made me feel a lot longer. I’ve even started packing trail runners, they just work really well.”

In addition to the four marathons he’s run, Permin spends at least some of his summer vacation on 100-plus mile backpacking trips. He’s done the Upper Mustang — a 77-mile, 15-day trek in Nepal — the Inca Trail to Machu Picchu, the Haute Route (from Chamonix, France to Zermatt, Switzerland) the Amalfi Coast, and locally, the John Muir and Wonderland Trail.

But as much as he loves backpacking, he doesn’t see himself testing the Pacific Crest Trail (PCT) anytime soon.

“I’ve thought about it my whole life, I just don’t want to do it,” Permin said. “For me, after about a month and a half of backpacking, I want to get back into running. I just don’t have the mental discipline to do the PCT. And I don’t want it to become a job.”

Permin said he’s been training for his next trek: the Colorado Trail — a behemoth 567-mile track from Denver to Durango — originally set for this summer, but that is all on hold for now.

Will coronavirus concerns wipe out high-school football this fall? WIAA says it’s too soon to tell

Could Seahawks sign Antonio Brown? It's unlikely and maybe unadvised but not impossible

As MLB negotiations near critical juncture, mutual motivation will be key to saving weird 2020 season