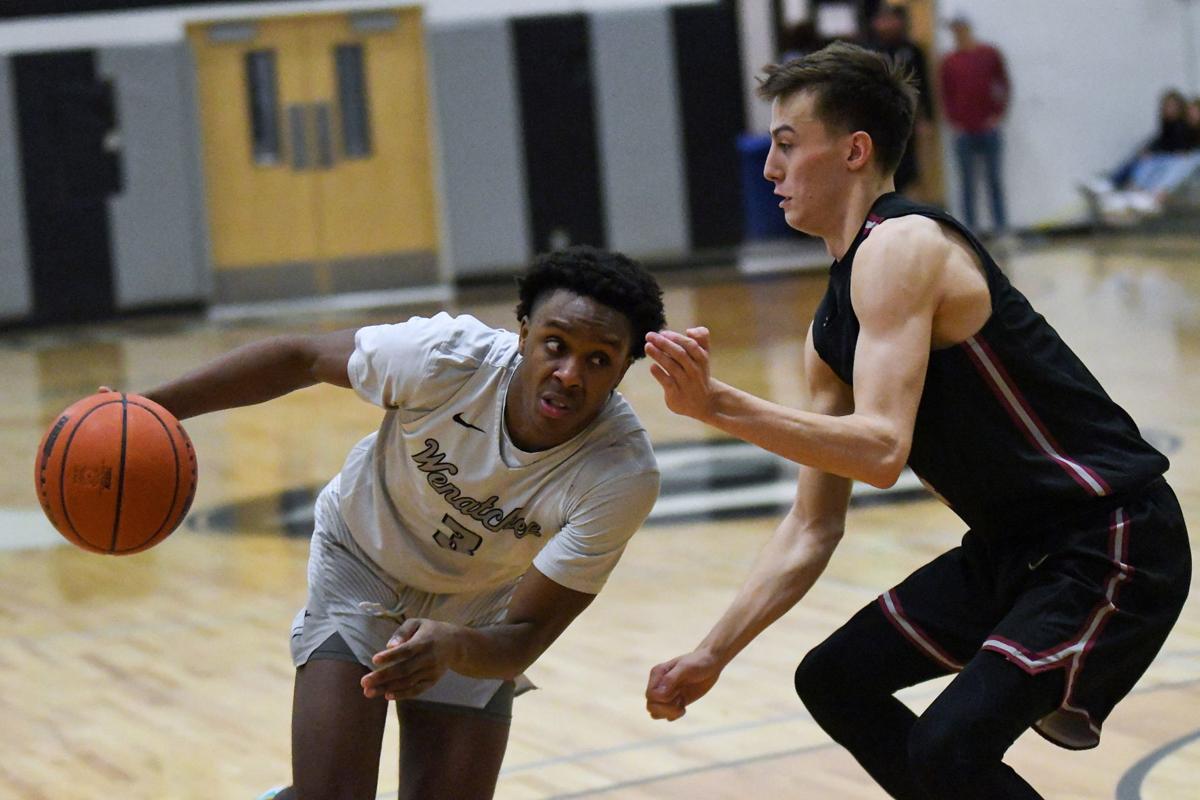 Sophomore Malik Parsons was saddled with four fouls early the second half, but he did hit a big shot down the stretch. 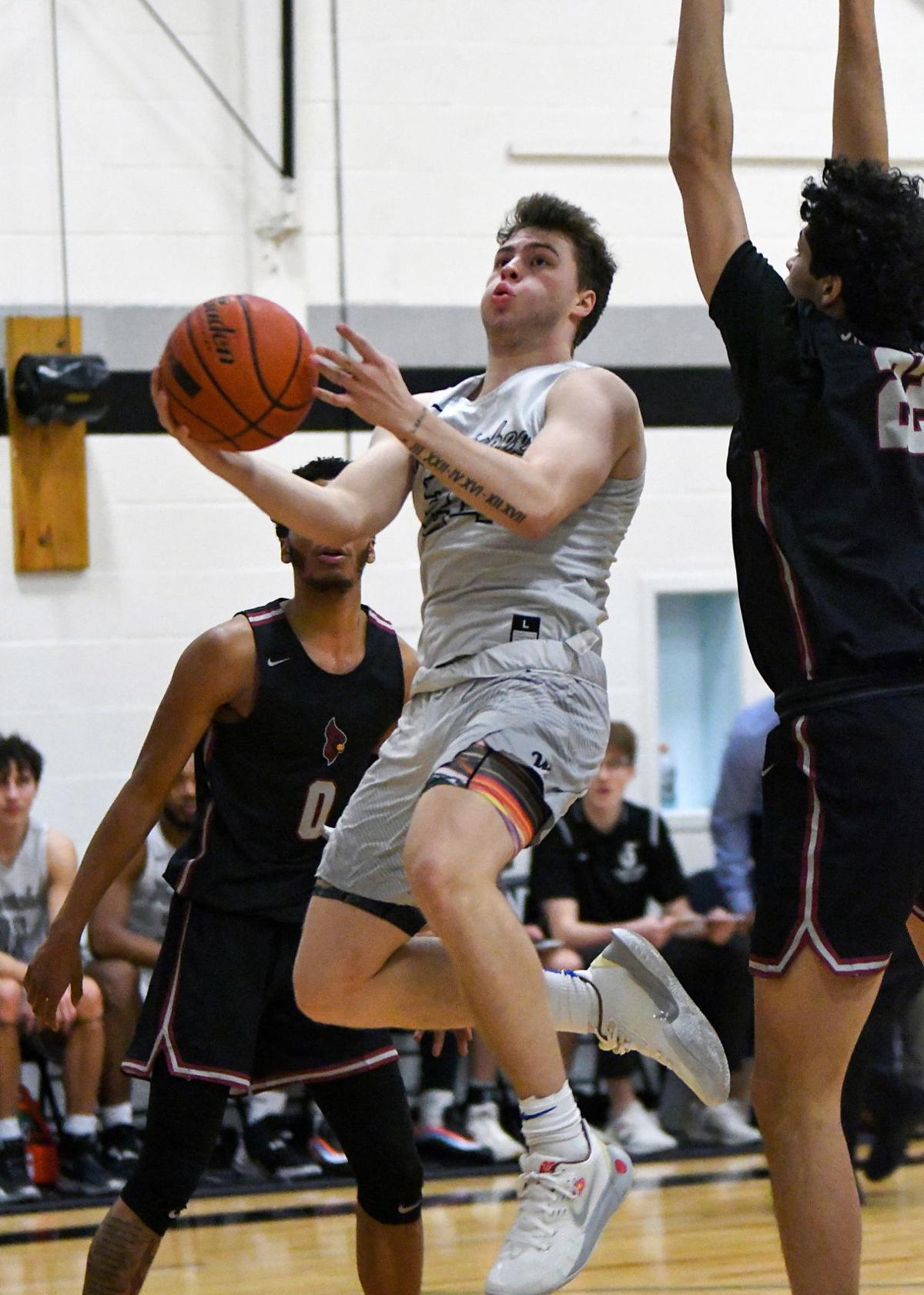 The Knights battled the tall, talented Cardinals all night long right up to the final minute, but some mistakes in crunch time proved costly as North Idaho prevailed 79-78.

“It was a hard-fought battle. Our guys came out with a lot of energy. Some balls down the stretch did not go our way. We have to adjust. I thought our guys battled for a good 40 minutes. It was a one-point loss. I’m just proud of my guys,” said Wenatchee Valley Head Coach Jeremy Harden.

In the first half, the Cardinals extended to a 10-point lead, 26-16 at 7:21. But the Knights kept it close, finding ways to attack their zone. A couple of late threes by freshmen Rayquan Everett and Chance Michels helped trim the deficit to three by halftime, 37-34.

Harden said they had a game plan for going against the North Idaho zone, which features two 6-9 players.

“We knew we had more muscular guys, so we tried to get it down low and get it inside out. I thought we did a good job of it,” Harden said.

Early in the second half, the Knight’s leading scorer, sophomore Malik Parsons, picked up his fourth foul. But give Wenatchee Valley credit, they stayed in the game with Parsons on the bench.

Abdullah hit a couple of free throws to cut the lead to 73-72 with 1:57 remaining. Next Cardinal possession, they turned it over. Parsons then worked some of his magic, hitting a 10-foot jumper which gave the Knights the lead 74-73 with 47 seconds left.

North Idaho came right down the court and found Austin in the corner, who drained a huge three with 29 seconds left, which gave the Cardinals the lead 76-74. The Knights had the ball with a chance to tie or take the lead, but they lost it out of bounds. A costly turnover indeed.

WV fouled Austin with 19 seconds left. He hit one of two, which made it a three-point game, 77-74. The Knights raced downcourt, got the ball to Everett in the corner. He misses the three but he is fouled with 9.2 seconds left.

He could tie the game with three made free throws. Everett missed the first two and made the third, cutting the lead to 77-75. After another foul, Austin made two free throws to push the lead to 79-75. A three by Michels at the buzzer made the final 79-78.

“We can play with anyone. North Idaho has beaten teams by 40 or 50 points. Proud of the guys. North Idaho is the number two team out of 36. We stuck with them for 40 minutes. It was our game with a minute left. A couple of balls didn’t go our way,” Harden said after the tough loss.

Of course, it was the unheralded player, Austin, who hit the big threes at the end and the free throws to sink the Knights.

“They are great in transition, so they get the ball and go downhill. We try to pack it in and let them beat us on the perimeter. At the end of the day, the two threes late cost us the game. We stuck with our game plan. Proud of the guys for sticking with it for 40 minutes,” Harden said.

WVC was led by Michels with 17 points and 4 assists. Abdullah had 13 points and 10 rebounds. Parsons had 10 points. Everett had 11. Freshman Isaac Jones had 12 points and 14 rebounds.

North Idaho was led by sophomore Nate Pryor with 19 points. Christian Guess had 15 points and 9 rebounds.

The Cardinals improved to 12-0 in conference and 24-1 overall, but they are not eligible for postseason play. Spokane is second in the N-WAC East at 12-1. WVC is now 8-4 in conference, just ahead of Treasure Valley at 7-5. The Knights are 20-5 overall.

As it stands, the Knights are the two seed in the East, since North Idaho is not eligible.

“I think are in position for the two seed. That would mean we would play a three seed in Everett. There are strong ones and twos from all the regions. We’re just going to keep playing as hard as we can. We have four more left. We’re going to try and hang onto the two seed,” Harden said.

Coming up for the Knights, a game at East leader Spokane on Saturday.