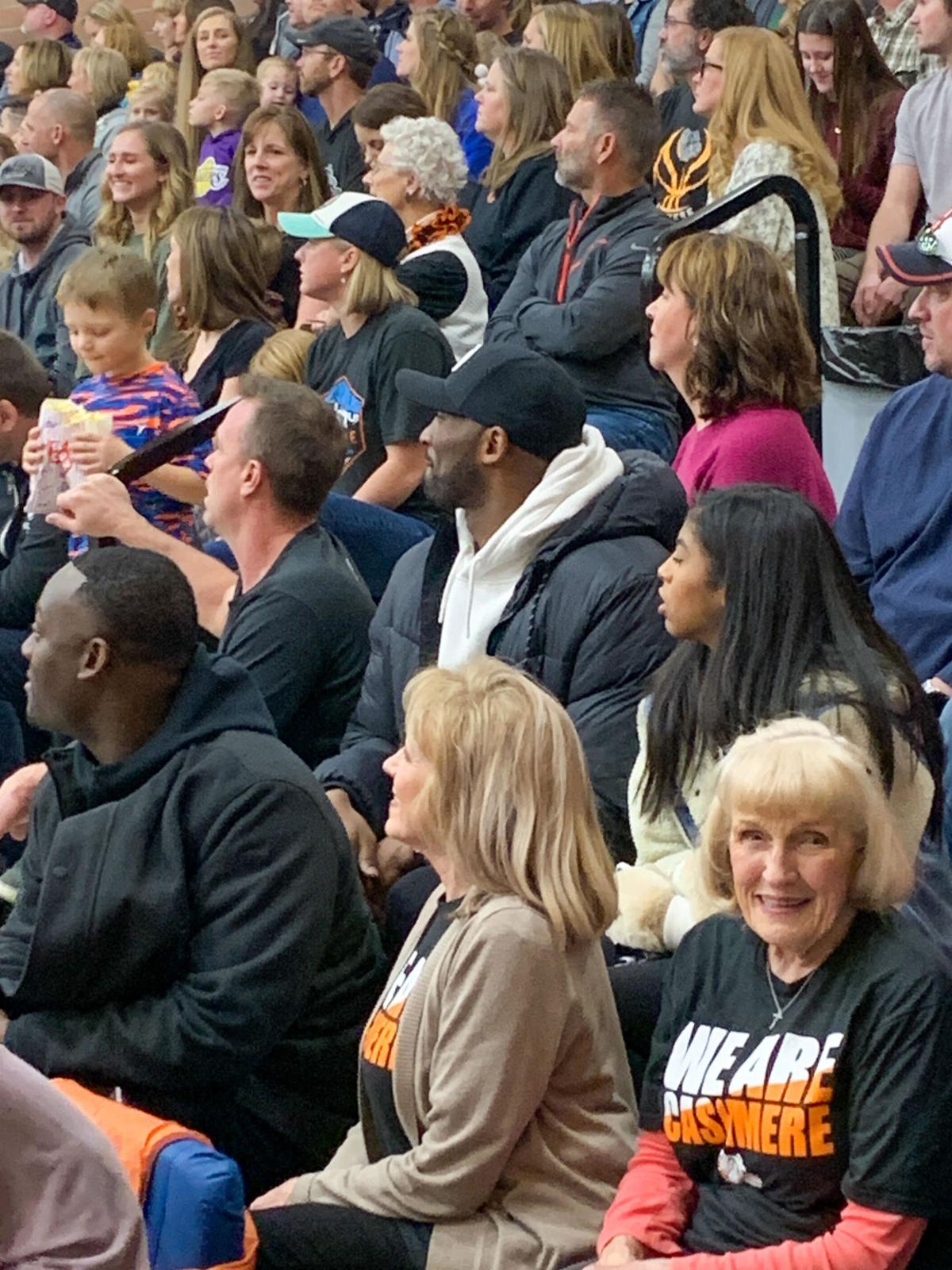 Kobe Bryant (pictured center) and his daughter watch Hailey Van Lith and the Cashmere girls beat Medical Lake 62-27 on Saturday in Cashmere. Bryant made good on a promise he made to Van Lith when she flew out to train with his daughter over the summer. World photo / Zach Johnson

Cashmere girls pose with Kobe Bryant and his daughter Gigi (middle row second from right) after their 63-27 win over Medical Lake on Saturday. Photo submitted by Brent Darnell

Kobe Bryant (pictured center) and his daughter watch Hailey Van Lith and the Cashmere girls beat Medical Lake 62-27 on Saturday in Cashmere. Bryant made good on a promise he made to Van Lith when she flew out to train with his daughter over the summer. World photo / Zach Johnson

Cashmere girls pose with Kobe Bryant and his daughter Gigi (middle row second from right) after their 63-27 win over Medical Lake on Saturday. Photo submitted by Brent Darnell

CASHMERE – It was just an ordinary brisk Saturday afternoon in Cashmere. Both girls and boys basketball teams were playing. The gym was standing room only. And the girls were giving Medical Lake the business over the first couple of minutes.

Then Kobe Bryant, one of the greatest guards to ever lace ‘em up, strolled in with his daughter Gigi. The pair had just flown in on their private jet and came to watch Hailey Van Lith and the Cashmere girls play.

And the girls didn’t disappoint.

Van Lith dropped 35 and nabbed nine steals, the girls put on a defensive display and Cashmere won 62-27 in front of the Black Mamba. Cashmere held Medical Lake to just two points in the first quarter and only seven in the half.

“I was excited to see how we would handle it,” Cashmere head coach Brent Darnell said after the win. “There was a whisper that Kobe was coming, we kept it quiet because we didn’t want it to be a circus here and keep it with Cashmere fans, not to take anything away from anyone else, just so people weren’t here to see Kobe, but to watch Cashmere basketball.”

We took a trip to #cashmere today to watch @haileyvanlith11 hoop and she and her teammates put on a show! Can’t wait to watch her play next season @uoflwbb

Of course, in the social media age we live in, news that juicy couldn’t be kept under wraps forever. There literally wasn’t an open seat in the building – and there was a curious amount of Lakers gear in the stands. Kids and parents swarmed the future Hall of Famer at halftime, clamoring for autographs, selfies or even a handshake.

And for the most part, Kobe obliged. His bodyguard turned a couple away, but Kobe still signed plenty of cards, jerseys and hats and glad-handed whoever was near him.

“What a great night for girls basketball,” Darnell said. “It’s just a testament to how far it’s come in the last 10-to-15 years to have one of the greatest players in NBA history show up to watch a 1A girls basketball game in central Washington. I thought we did a great job of not getting caught up in the hype and embracing the moment. It was fun to be apart of it.”

Between their championship in Portland over winter break, and playing in front of an NBA legend, no moment has been too big for the Bulldogs so far this season. Cashmere, the clear favorite to win the 1A state title at this point, is (12-0) and has won every game but one by double-digits.

Medical Lake stood no chance against Cashmere’s man-to-man defense. But they were able to score 20 points in the second half, led by Lexie Redell, who finished with 12. As a team, the Bulldogs collected 18 steals. Riley Johnson chipped in eight points and three steals and Grace Erdmann added six points and a team-high 13 rebounds.

After the game, Kobe and his daughter went into the Cashmere locker room and Kobe talked with the girls.

“He’s a super humble guy,” Darnell said. “He wasn’t talking x’s and o’s but more about the mental toughness of playing the game. He came in and looked at all the girls and said, ‘you guys play like a bunch of dogs, just nasty tough.’ They got a kick out of it. It was a great compliment from him and a special night for us.”

“He was super cool and smiled in every (photo),” Darnell said. “You would think he would get tired of that but he was just like an ordinary guy.”

Shortly after, Kobe, his daughter and bodyguard got back in their car and drove back to Pangborn for a flight back to Los Angeles.

“It was a great night for fans, the girls and one that I’ll never forget the rest of my life,” Darnell said.

With Felix Hernandez gone, the 2020 Mariners lack star power — and just about any appeal for fans