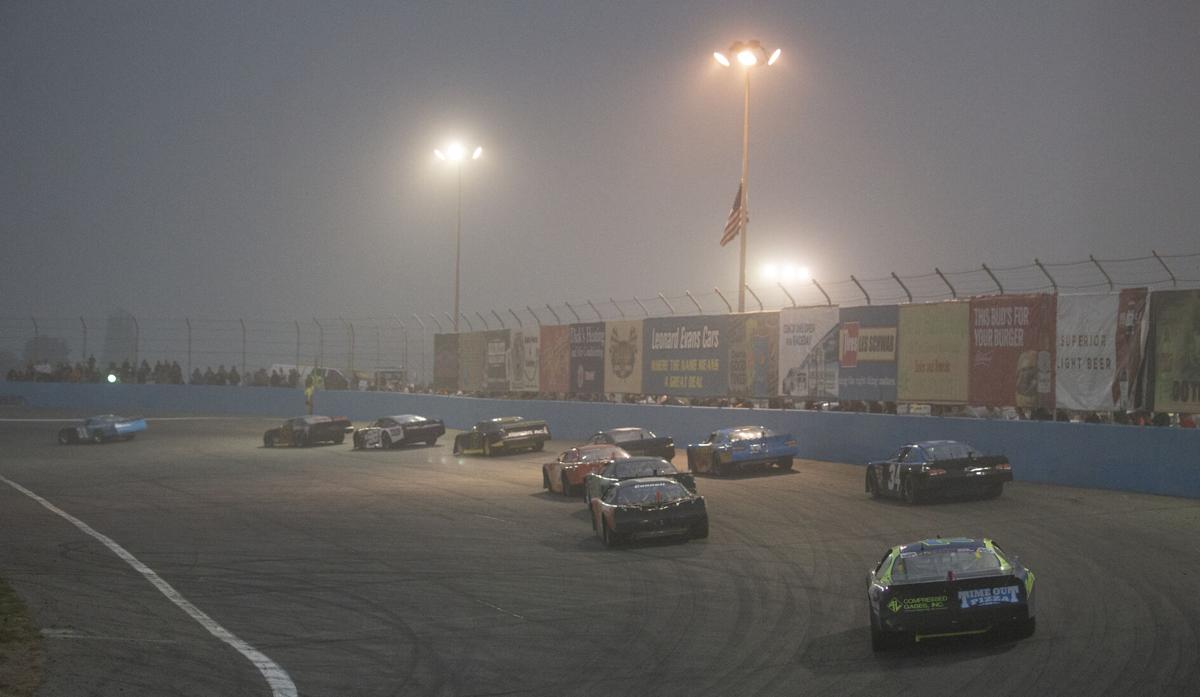 World photo/Mike Bonnicksen The Pro Late Models take to the track on a smoky Saturday night to compete in a B Main race at Wenatchee Valley Super Oval on Sept. 12. 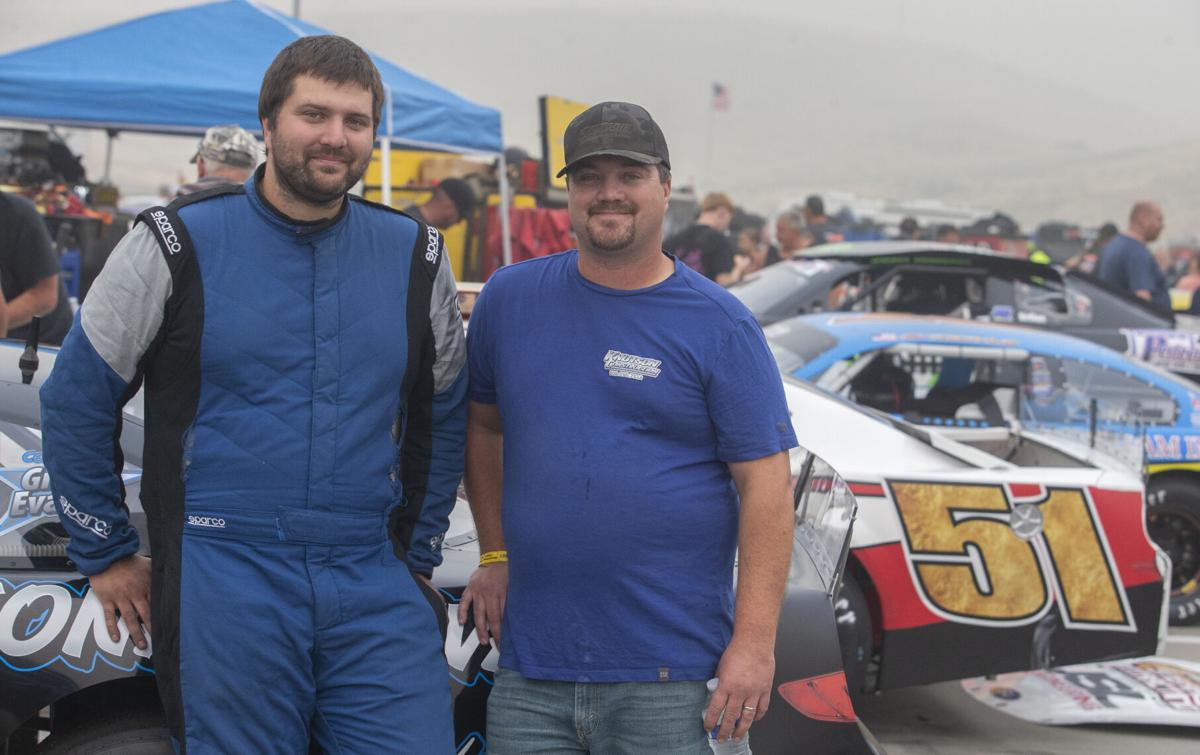 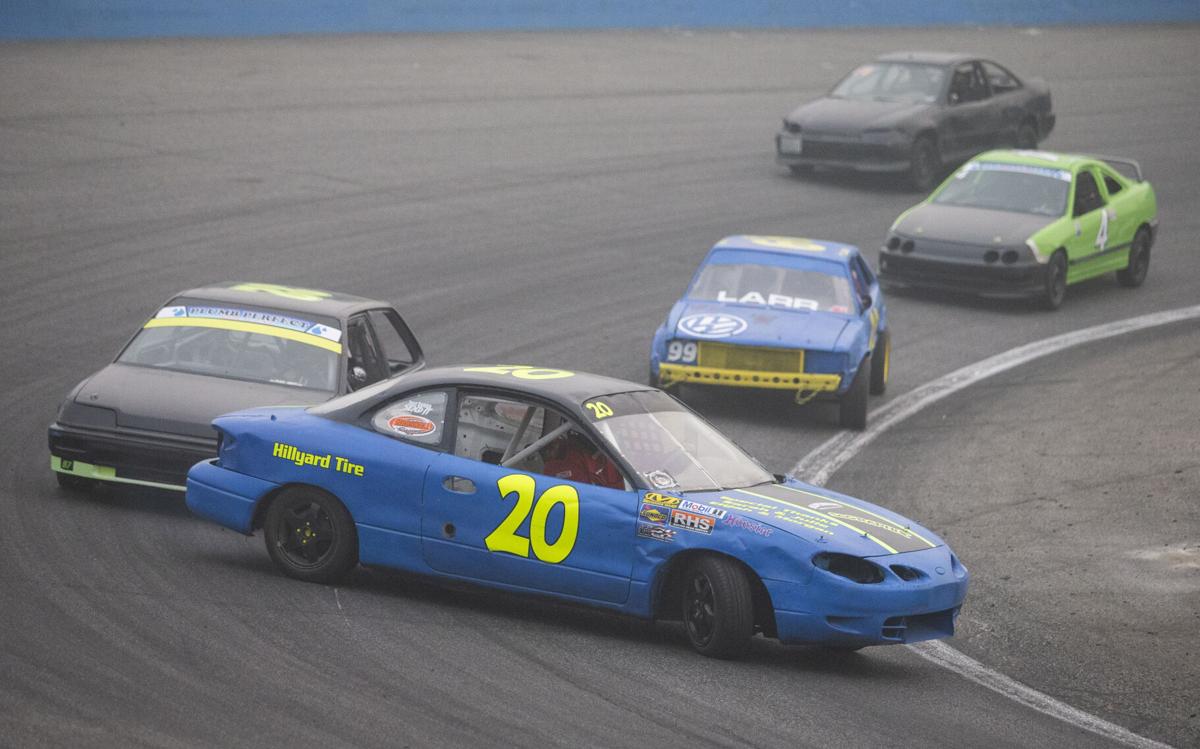 World photo/Mike Bonnicksen Elijah Pennington gets a bit sideways on the track but was able to drive out of it during a Roadrunners heat race at Wenatchee Valley Super Oval on Sept. 12.

World photo/Mike Bonnicksen The Pro Late Models take to the track on a smoky Saturday night to compete in a B Main race at Wenatchee Valley Super Oval on Sept. 12.

World photo/Mike Bonnicksen Elijah Pennington gets a bit sideways on the track but was able to drive out of it during a Roadrunners heat race at Wenatchee Valley Super Oval on Sept. 12.

He dominated the field in the 100-lap Pro-Late model main event, collected the $2,500 first-place prize and went home with some hardware after earning enough points to beat out his brother Glenn for the track championship.

“It’s pretty cool,” Michael told NCWLIFE postrace. “Garrett Evans gave me some advice after the last race and I just put it to the car. I can’t thank him enough, as well as my brothers Glenn and Chris Knutson, my wife and kids and my mom for putting up with us. I wish I got to compete against my little brother a little more (but) I’m pretty excited.”

With a packed field of 24 Pro-Late models taking a green flag, the first lap in the main event was hectic. Several cars piled into each other after one driver got loose coming out of turn four, but since no one had completed a lap, all the drivers were brought back into position for a restart.

But after the restart, racing was fairly clean. Terry Halverson, Wenatchee, held onto the lead for a few laps before getting overtaken by Lance Elliott — who towed all the way up from Laramie, Wyoming to race Saturday night. But as Elliott made his move on Halverson, Michael stuck right on his bumper. Knutson stayed with Elliott for a couple of laps before grabbing the lead with 77 to go.

And from there, he didn’t relinquish it.

Knutson hammered down on the throttle and build up a near half-lap lead before a caution came out with 48 laps left. But by that point, he had passed enough lap traffic to sit seven cars ahead of the second-place driver (Tyson Lang) on the restart.

After taking the green flag, Knutson built a substantial lead — nearly lapping every other driver — and cruised to the checkered flag.

Knutson was so far ahead of everyone else, he lapped the third-place driver (Kaiden Anderson) on the final lap of the race. Only one other driver was on the lead lap at the finish.

Michael trailed his brother by seven points coming into the night. But after qualifying second and placing first in the race, Michael pulled ahead by 22 points. Glenn finishes the season in second and Gary Homad, East Wenatchee, in third.

Levie Jones, Puyallup, continued his supremacy in the Tri-State Legends, winning his second race at the Super Oval this season. His sister Allie-Mae Jones took the checkered in her final race in the Bandoleros — she plans to join her brother in the Legends next year.

“I’m super excited,” Allie-Mae told NCWLIFE Saturday after the race. “I’ve always looked up to my brother and now I’ll get to race against him.”

With the win, Allie-Mae finishes two points ahead of Jordan Mullins, Naches, and earns the Bandolero track championship.

Kasey Kleyn, Quincy, placed first in his first Junior-Late model race of the season, and Jared Ingram, Wenatchee, held on for his third checkered flag in the Plumb Perfect Roadrunners. With one race still to go for the Roadrunners, Masen Hagood, Ephrata, leads by 43 points.

Though the Pro-Late models, Junior-Late models and Bandoleros are done for the season, the Super Oval still has one more race left on the schedule: the Neal Newberry 125 on Sept. 26, featuring the Dicks Heating and Air Conditioning Thunder Cars, Roadrunners, Holaday’s Custom Muffler B-Mods and the Northwest Super Late models.