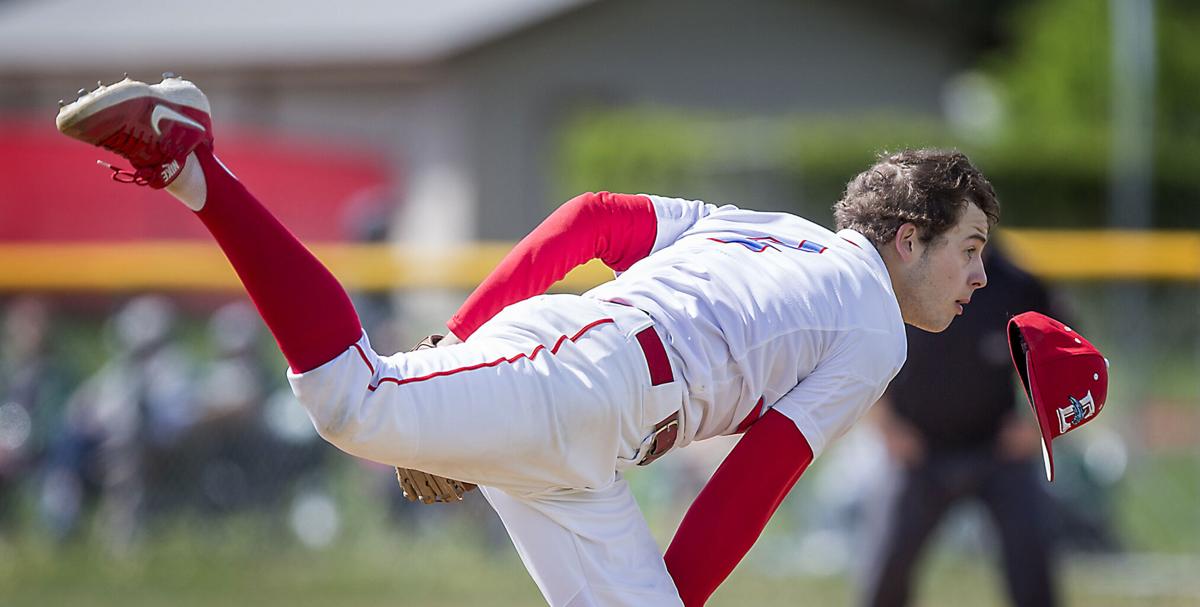 World photo/Don Seabrook Eastmont starting pitcher Austin Popoff loses his hat but holds the Chelan Goats scoreless while in the baseball game Saturday, May 1, 2021 at Dan White Field. The Wildcats won the first game with Chelan walking in the winning run 4-3. 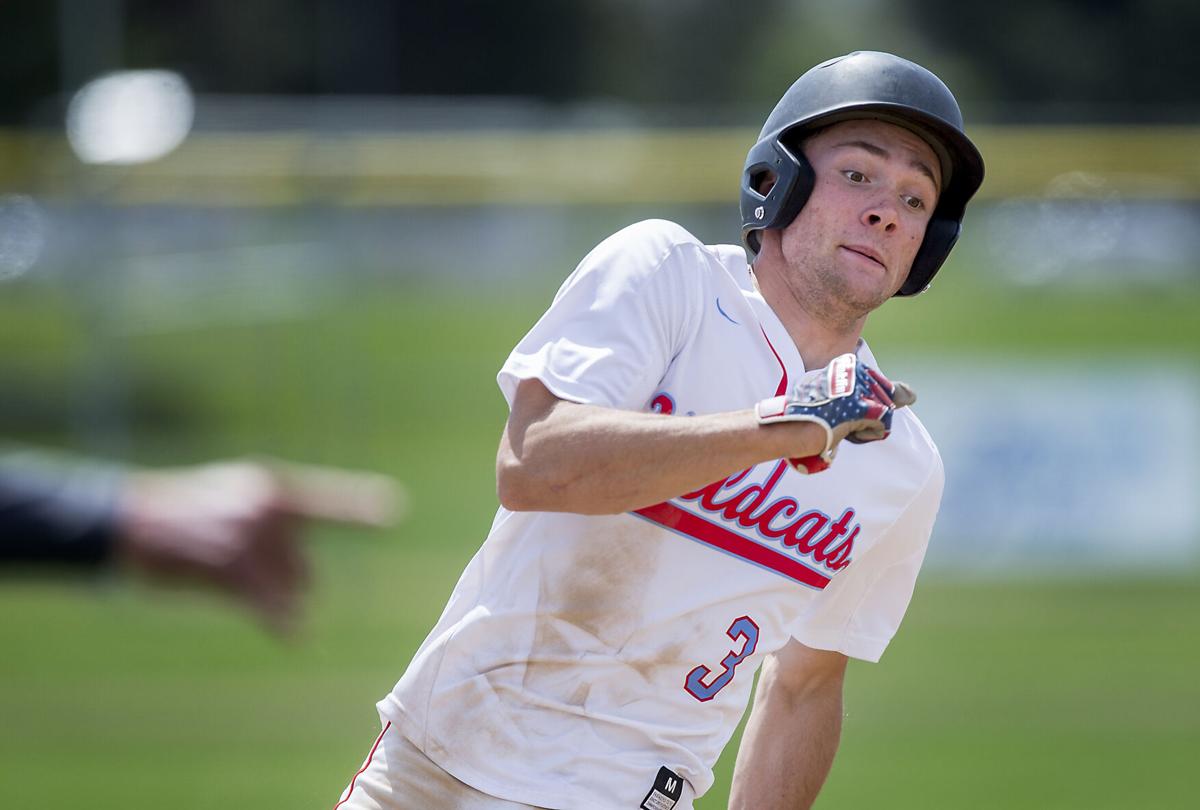 World photo/Don Seabrook Eastmont starting pitcher Austin Popoff loses his hat but holds the Chelan Goats scoreless while in the baseball game Saturday, May 1, 2021 at Dan White Field. The Wildcats won the first game with Chelan walking in the winning run 4-3.

The Eastmont Wildcats continued their hot start to the season with their fourth straight win Saturday, sweeping the visiting Chelan Mountain Goats 4-3 and 10-0 in a doubleheader at Dan White Field.

The wind was howling all day, but Eastmont pitcher Austin Popoff was able to dice up the Goats lineup in game one.

"He's always steady," Eastmont head coach Darren Hoff said of the senior. "Even if he gets into trouble, it never bothers him. I was heading out to the mound at one point and he was already taking signs for the next pitch. That's the best part of his game, he just stays level-headed and plays."

The Wildcats won the first game off a walk-off walk. The bats then came alive in the second game.

"We took advantage of the walks and then had some timely hitting," Hoff said. "Cooper (Richards) did a great job on the bump."

Eastmont was able to 10-run rule the Goats in five innings. The Wildcats have now won their last four games and have dropped only two so far this season. The team has gelled under Hoff, who is in his first year after taking over for Brandon Schmitten.

"They do fine with each other, it's just adjusting to me," Hoff said. "It's gone very well though and we've been seeing some of the things that we talk about be applied. The kids are doing well."

"They are a well-coached group that doesn't beat themselves," Hoff said. "We just have to do the fundamentals and hopefully make a game of it. The seniors are playing their last game on their home field and given all that has happened over the last year, it'll mean a little extra for them."

Wenatchee hosted the Brewster Bears for a doubleheader Saturday afternoon

The Panthers won the first game after Chase McDowell cracked a walk-off grand slam to win the game 7-6.

“We came back and put some runs in the end,” Wenatchee Head Coach Jeff Zehnder said. “It was one of those games where everyone chipped in to get the win.”

The second game swung in Brewster’s favor. The Bears were up 5-3 going into the seventh inning. The Panthers got a couple runners on base but they were unable to drive them in.

“We didn’t let up,” Zehnder said. “It was some good baseball, good competition back and forth and I enjoyed it.”

The Cashmere boys baseball team beat the Quincy Jackrabbits handily in their doubleheader Saturday afternoon. The Bulldogs won the first game 18-3, and the second 12-0.

“I was very impressed with how we played from start to finish,” Cashmere Head Coach Colton Loomis said. “When you get up a few runs it's easy to relax, but they competed, and worked hard the whole game.”

In the first game, Cashmere’s Duke Odenrider was 4-5 at the dish, with three singles, one double and four RBIs. Kaden Keogh went 3-4 with three singles and two RBIs. Cole Scott was 2-2 at the plate, cracking two doubles and three RBIs. And Brayden Weatherman pitched four innings, fanning nine and allowing just one hit.

“It can be hard to bounce back in the second game and keep focused after a win,” Loomis said. “But they did well.”

You can do everything to create opportunities for yourself, solid looks at the goal, but for whatever reason, the moment you strike, the ball has other plans, and it can feel as though it was all for nothing.

Wenatchee boys soccer had a real test on their hands when they hosted Wahluke Saturday afternoon.

The Panthers may not have been able to find the net at the level they created opportunities, but they had enough grit to win the game in a shootout, and preserve their undefeated season.

“We got the win,” Wenatchee Head Coach Dennis Tronson said. “We outshot them 30-6 but their goalkeeper had a good match. Wahluke is a good team; we just struggled to find the finishing touch.”

Wenatchee’s first goal came late in the first half. In the 33rd minute, Marcos Bravo assisted Julian Reyes to give the Panthers the lead. The second came from Giovanni Munoz.

But then Wahluke countered, scoring in the 47th and 65th minute to level the game 2-2.

“We made two mistakes and they made us pay for it,” Tronson said. “We didn’t finish the job when we had the opportunity.”

The tie eventually forced a shootout.

Wenatchee made their first four goals. Wahluke matched each one until the last. Wenatchee’s goalkeeper Luis Mendoza made a clutch save at the end to seal the win.

“It was a really good test,” Tronson said.

Something about halftime has a way of supercharging the Eastmont boys' soccer team.

After a scoreless first half against Royal, Friday afternoon, they poured on four goals in the second and defended a clean sheet to win 4-nil.

“We did very well,” Eastmont Head Coach Vidal Hurtado said. “It did take us a while to get our first goal, but after that, we added three more in about 15 minutes.”

Alfredo Gonzalez was the first to break the seal for Eastmont when a beautiful cross was sent his way and he volleyed it in. The next goal came from Edgar Leon, who cracked a laser from about 25-yards out.

The last two were tallied by Tyrell Malcolm.

“The quality of soccer was really good,” Hurtado said. “We built up well but struggled to find the net in the first half. We did a good job defending, and overall, I’m very proud of the way we played.”

The Cascade boys soccer team hosted Omak Friday afternoon, and the Kodiaks didn’t waste any time controlling the pace or finishing their shots.

The Kodiaks started the second half with nearly a brand new team, after clearing their bench for playing time. They would get one more goal before the final whistle, winning 6-0.

“It was a good opportunity to give our bench some time,” Cascade Head Coach Jesus Sandoval said. “We worked on our dynamic. After a painful game against Wenatchee, we focused, and did a really good job of applying what we do in practice to the game.”

The second half is critical in boys' soccer. Especially when neither team is able to net a goal before halftime.

You can allow this to build anxiety or be more matter-of-fact about the situation, as Cashmere was when they hosted the Brewster Bears Saturday afternoon.

“Brewster played well,” Cashmere Head Coach Emmanuel Flores said. “We had a good talk at halftime, and we were calm, cool and collected.

A minute into the second half, Cashmere’s Miguel Ramos put in the first goal off the match off an assist from Evan Bakken 1-0.

Bakken then got his own when he fired a shot from outside 18-yards and buried it in the net.

Ty Schoening got in the mix when he converted a penalty kick to push the lead to 3-nil and then Pierce Naccarato tallied the fourth.

“We moved the ball well, and were able to push up the flank and center our passes,” Flores said.

“They put us under pressure,” Flores said.

But before the game was over, Cashmere’s Oscar Orozco assisted Evan Bakken for his second goal of the day.

You win some and you lose some.

Eastmont split its doubleheader matchup with Ephrata on Saturday.

Eastmont took the first game 8-7, but it wasn’t easy.

The Wildcats plated five in the first inning but were held scoreless for the next four frames. Ephrata cut the lead to one with a five-run inning in the fifth, and then took the lead in the sixth, but Eastmont was able to scratch out a couple of runs to take the first game.

“It was a good win for us,” Eastmont Head Coach Cliff Johnson said.

Zoey Sundet pitched a complete game with four strikeouts and no walks. Kiley Heinz went 3-4 at the plate with a home run and two RBIs. Jenna Hursh mashed a three-run homerun and was 1-4 at the dish.

“We didn’t hit well,” Johnson said. “We weren't able to move runners around the bases. Ephrata hit better than we did.”

‘I would rather have this than the lottery’: Redmond golfer hits two holes-in-one in a round

UW rowing has always counted on walk-ons. Here’s how this group was picked sight unseen.

For Washington, the competition is wide open at wide receiver

Storm newcomer Kennedy Burke has had a self-described ‘crazy’ basketball journey. Now she has a chance to start for the defending champs