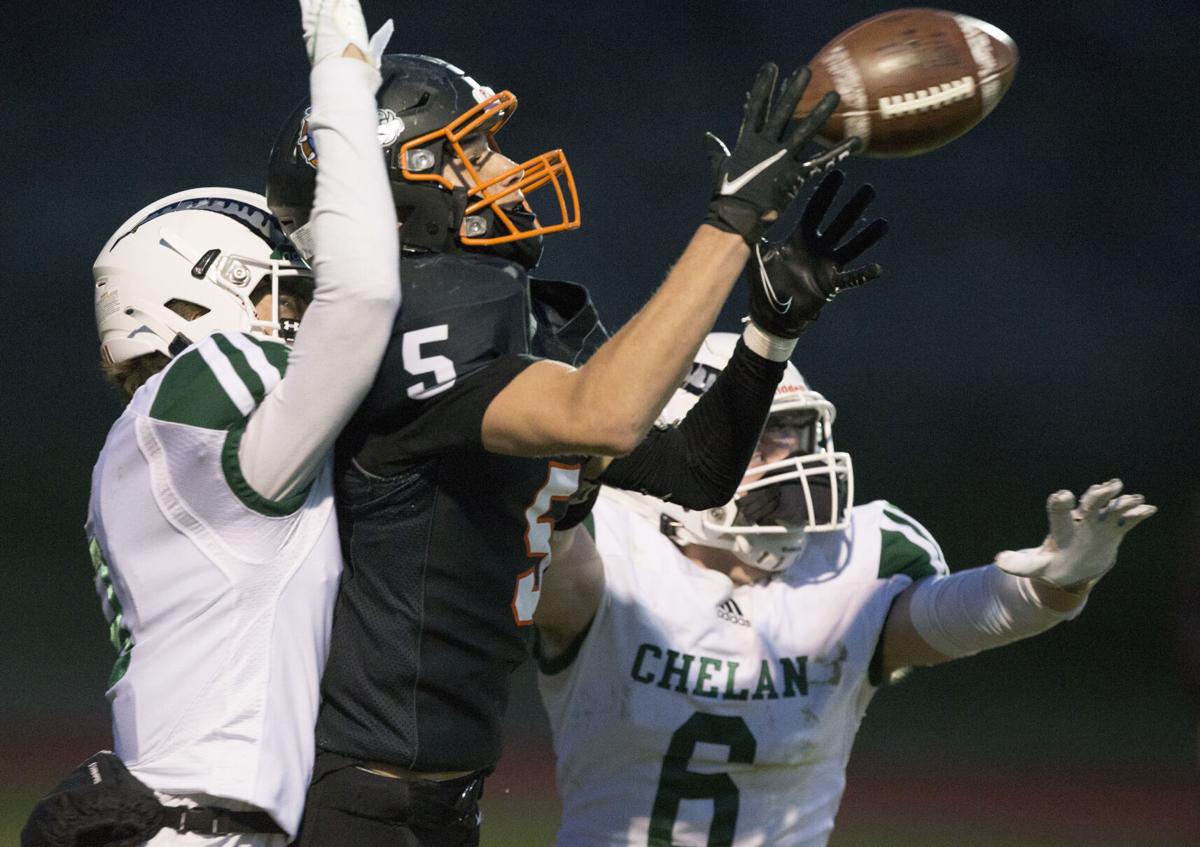 Cashmere's Nate Phillips tries Friday night to catch a 2-point conversion pass between Chelan's Tanner Woodley, left and Ethan Kehl. The pass was incomplete but interference was called on the play. 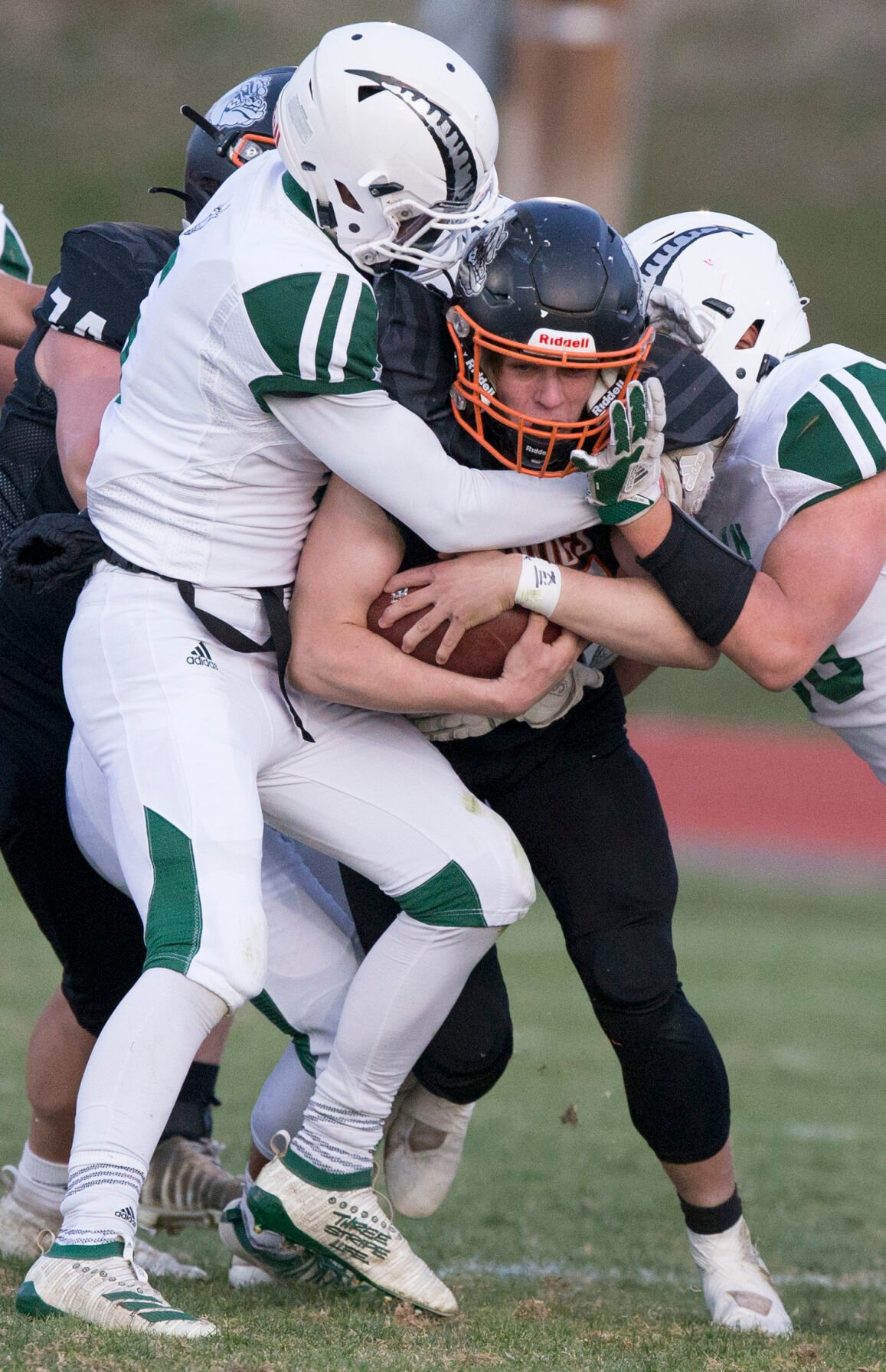 Hunter McCabe of Cashmere is brought down by Chelan players.

Cashmere's Nate Phillips tries Friday night to catch a 2-point conversion pass between Chelan's Tanner Woodley, left and Ethan Kehl. The pass was incomplete but interference was called on the play.

Hunter McCabe of Cashmere is brought down by Chelan players.

CASHMERE — The infamous Bronze Shoe trophy will remain in the Cashmere High School trophy case for at least another few months after the Bulldogs beat the Chelan Goats 15-7 Friday night at Cashmere Football Stadium.

And this one carried some weight.

A state bid might not have been on the line — this was the final game of the season for everyone — but Friday’s tilt was for the CTL Championship, and it was homecoming and Senior Night. So there was a lot on the line for the Bulldogs’ seniors.

“It’s emotional,” Cashmere head coach Bryan Bremer said after the win. He’s now (3-0) against Chelan. “I was telling my wife before the game that I was going to cry either way. But I turn around now and see kids taking pictures and realize how much they have vested into the football program. They were just little sophomores when I took over but this is what happens when you buy into something than one person. I could not be more proud of this group.”

The Bulldogs defense delivered big-time, hassling junior quarterback Reed Stamps all night and forcing five turnovers (three picks and two fumbles) — one of which the Bulldogs took back for a defensive touchdown.

Chelan never got in much of a rhythm offensively and mustered just 177 total yards. Cashmere, in comparison, wasn’t able to do much either — aside from Hunter McCabe who rushed for 98 yards on 25 carries — but the Bulldogs took advantage of field possession, controlled the clock and won the turnover battle.

Bulldogs senior quarterback Sam Phillips tossed a pick on the second play of the game to Chelan’s Dillon McCardle. But Stamps gave the ball right back to Cashmere after throwing a pick on the very next play to Cashmere’s Dominic Harrington.

Neither team scored in the first quarter but Cashmere had a 49-yard touchdown pass to McCabe taken off the board following a series of unsportsmanlike conduct penalties on both teams. Another Cashmere touchdown was called back on the next possession following a chop-block. It just seemed like the game was heading into half knotted up at 0-0.

But then, with one minute remaining in the half, and on fourth-and-26 Phillips connected on a deep ball to his twin brother Nate, which put Cashmere ahead 8-0 following the two-point conversion.

On the ensuing possession, Stamps hit McCardle down the seam for a 30-yard gain before clocking the ball with a little over 10 seconds left in the half. Stamps then bounced off a Cashmere defender and scrambled left for a first down, setting the Goats up inside the Bulldogs’ five with a few seconds left on the clock.

The Goats were initially stopped on the next play, but a penalty in the endzone gave Chelan an untimed play and Stamps plunged into the endzone to pull the Goats back within one.

Unfortunately for Chelan, that was about the only success the Goats had on offense. Cashmere controlled the clock in the second half and didn’t turn the ball over while the Goats fumbled twice and Stamps tossed his third interception.

Cashmere senior Sam Phillips recorded a pair of picks and scooped up a Stamps fumble in the fourth quarter, which he took back for a 20-yard touchdown.

“I think (4-1) and a league title sounds good,” Bremer said. “We were one point away from being (5-0) but to have the Pear Bowl, Bronze Shoe, CTL Championship and win on Homecoming/Senior Night, that feels pretty great.”