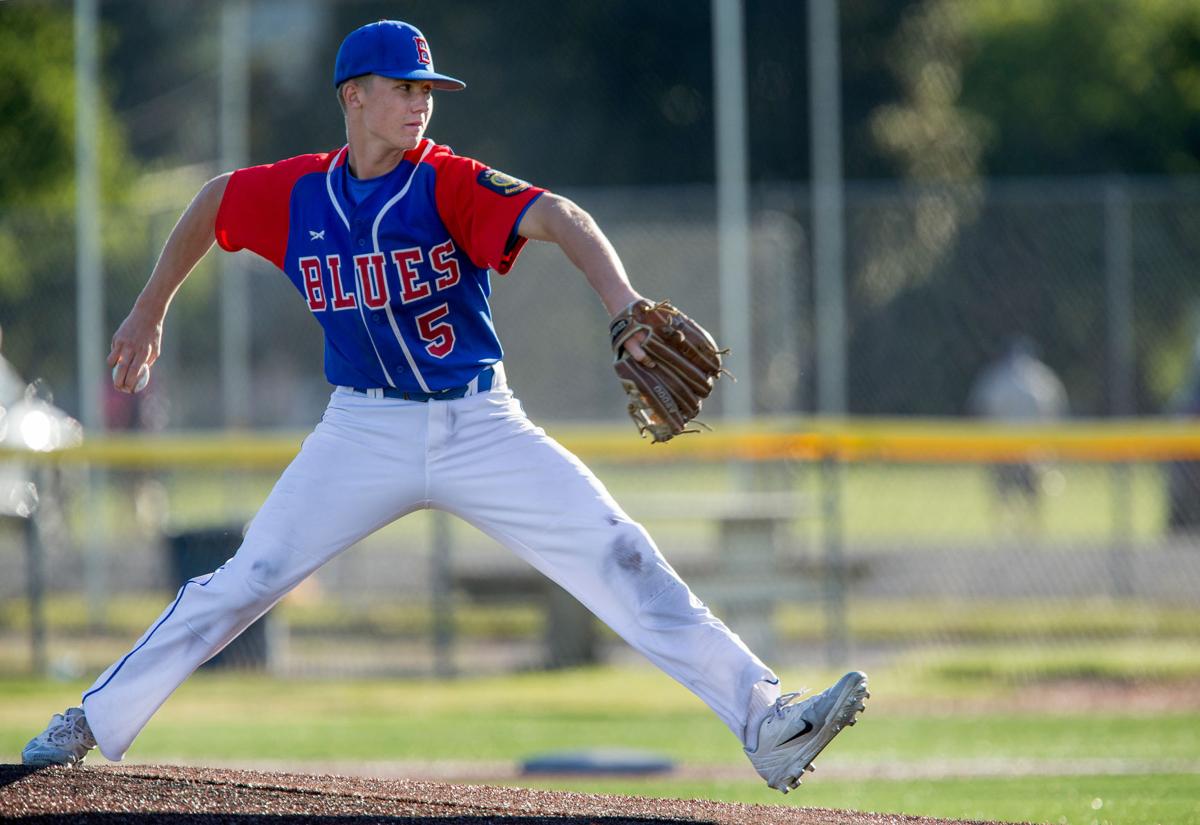 Apple Valley Blues pitcher Jared Rubash, Wenatchee, throws the last inning of his no-hitter against Prosser two summers ago. Rubash finished his high school career (9-3) with 75 strikeouts and a 1.95 ERA over 57 innings. He'll play next season for the University of Oregon. 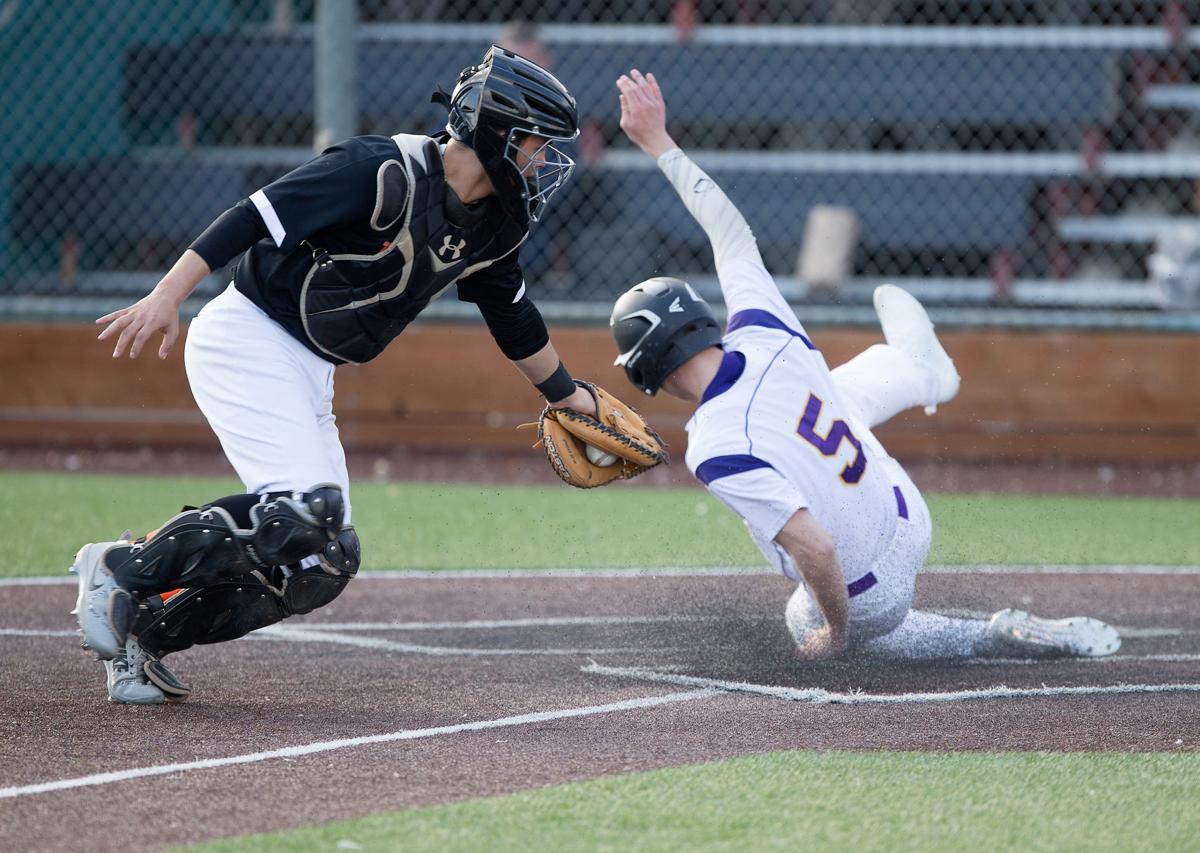 Apple Valley Blues pitcher Jared Rubash, Wenatchee, throws the last inning of his no-hitter against Prosser two summers ago. Rubash finished his high school career (9-3) with 75 strikeouts and a 1.95 ERA over 57 innings. He'll play next season for the University of Oregon.

WENATCHEE — When coach Jeff Zehnder got his first glimpse of Jared Rubash as a freshman, he was impressed.

Even though Rubash hadn’t pitched much coming into Wenatchee high school, he wanted to take a crack at it. Zehnder liked his arm angle and thought he had a good approach, so he asked the late-great pitching guru Steve Kline to take a look at him.

“He came back rubbing his hands together — he was in love with him,” Zehnder said. “We knew he was going to be good. He had a loose arm and fast-twitch muscles; everything he does is quick.”

After splitting time between JV and varsity as a freshman, Zehnder threw Rubash into the starting rotation during his sophomore season. But neither he nor Kline could have predicted just how dominant Rubash would be. In his first start against Davis, Rubash was perfect — literally. He didn’t allow a single runner to reach base through five innings of work and the Panthers mercy-ruled the Pirates 11-0.

Rubash couldn’t have had a better debut.

“To be a part of it was pretty impressive,” said Zehnder. “Knowing that we had a kid who works his butt off, we were excited to watch him grow.”

In 11 games and six starts as a sophomore, Rubash finished (5-2) with a 1.09 ERA and 28 punchouts in 32 innings. He allowed just five earned runs the entire season and helped Wenatchee advance to the Final Four — where the Panthers finished fourth after losing to Federal Way in the third-place game.

Just a month after the season ended, during summer legion ball, Rubash threw a no-hitter in a home game against Prosser while going three-for-three at the plate.

“He just had one walk and that’s it,” Zehnder said after the game.

That early burst of success only propelled Rubash. As a junior, he dominated. Rubash went (4-1) in five regular-season starts and fanned 47 batters in 25 innings while holding a 2.80 ERA.

More impressively though, Zehnder said he gained six ticks on his fastball in just two months.

“He went from tossing 82 mph at the beginning of the season to 88 mph by playoffs,” Zehnder said. “He’s just a different person; you don’t often see that kind of jump in only two months. And what I’ve noticed is that his level of competitiveness doesn’t have a cap. He’s the epitome of a competitor — a high-strung thoroughbred — and it’s been a real pleasure to be around him every day.”

With Rubash, standing at 6-foot-4, and fellow seniors Thomas Blakney, Colton Files and Chandler Holaday set to lead the Panthers pitching staff this spring, Wenatchee was poised to make another deep run at the state tournament in Pasco.

“Our goal was to be playing baseball on the final day of the high school season,” Zehnder said. “This group has been there and they know what it’s like to be in the top four out of 65 teams in 4A. We wanted a piece of it and a shot at Moses Lake — who knocked Wenatchee out of districts last season. All the respect in the world to Donnie (Lindgren) and those boys down there — we love to compete against them; getting there was definitely the mentality.”

When the decision finally came down that the season was going to be canceled, Zehnder said it was a pretty somber day in the locker room; 11 seniors’ dreams were shattered.

“The best way to put it was going through the phases of grief,” Zehnder said. “Everyone is pretty much at the end — acceptance — now; it is what it is. But when we first heard the news that we wouldn’t be practicing anymore, we were in disbelief. You get angry, plead, beg, reason, and do it all; but the kids, they really leaned on each other. They are a true team.”

Zehnder felt proud saying that all of his seniors are planning to attend college and a few are continuing with their baseball career. Thomas Blakney and Michael Laine are staying in town and playing for Wenatchee Valley College, TJ Scherting and Holaday are heading to Yakima Valley Community College, and Rubash is going to the University of Oregon.

Originally committed to Yakima Valley, Rubash de-committed and signed with Oregon this past September.

“They’re coming along as a program and have good support,” Zehnder said. “Go Ducks! I have a couple of buddies down there and that’s all I hear. I’m just glad he’s getting to pursue his dream. His ceiling is still high, I think, if he puts some more time into the gym, which he’ll have that opportunity being around Oregon’s trainers.”

“My only concern is those Oregon seniors are going to be staying if they don’t get drafted, and depending on how much of their (pitching) staff comes back, that will be a challenge. But I’m looking forward to watching him play.”