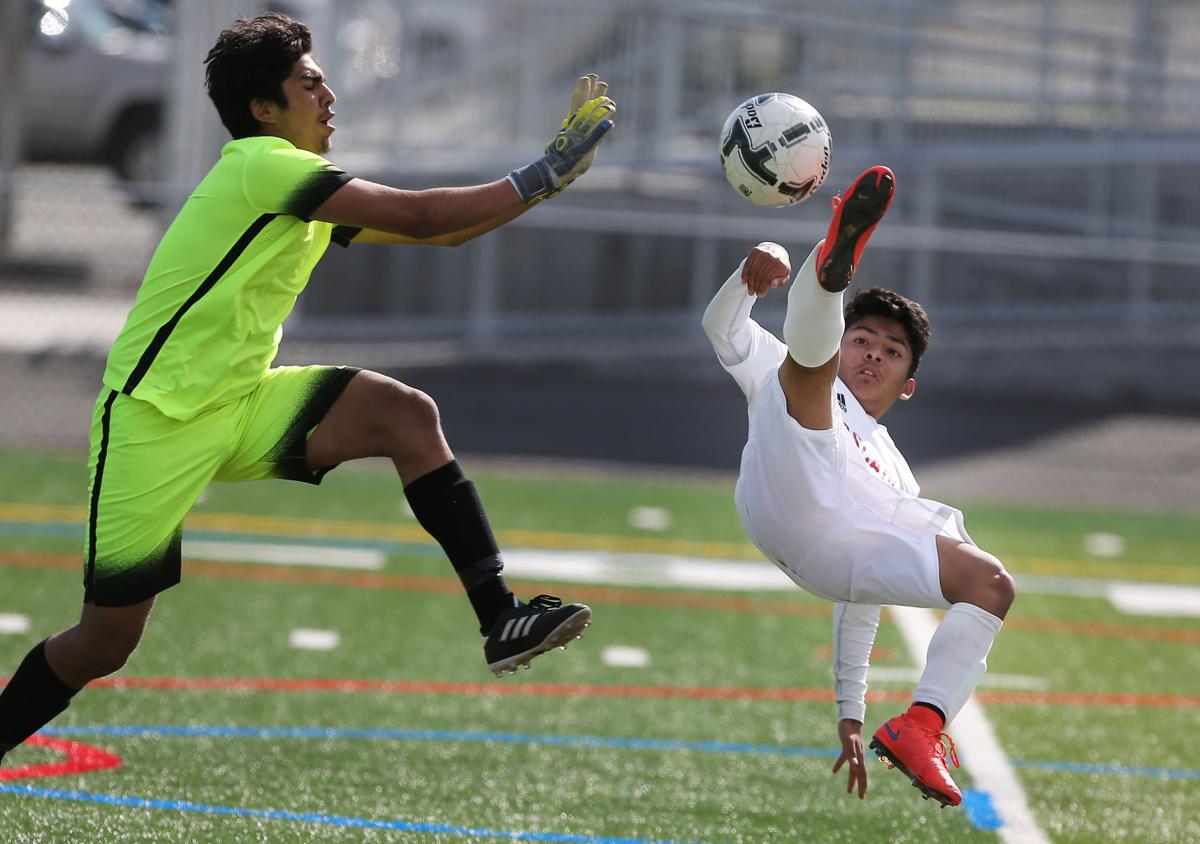 Cascade’s Arturo "Cholo" Avila takes a shot on goal as Okanogan’s goalie Victor Perez tries to defend the shot. Avila scored a whopping 26 goals his freshman year and is Cascades' all-time leader in goals scored with 69 in just three years. 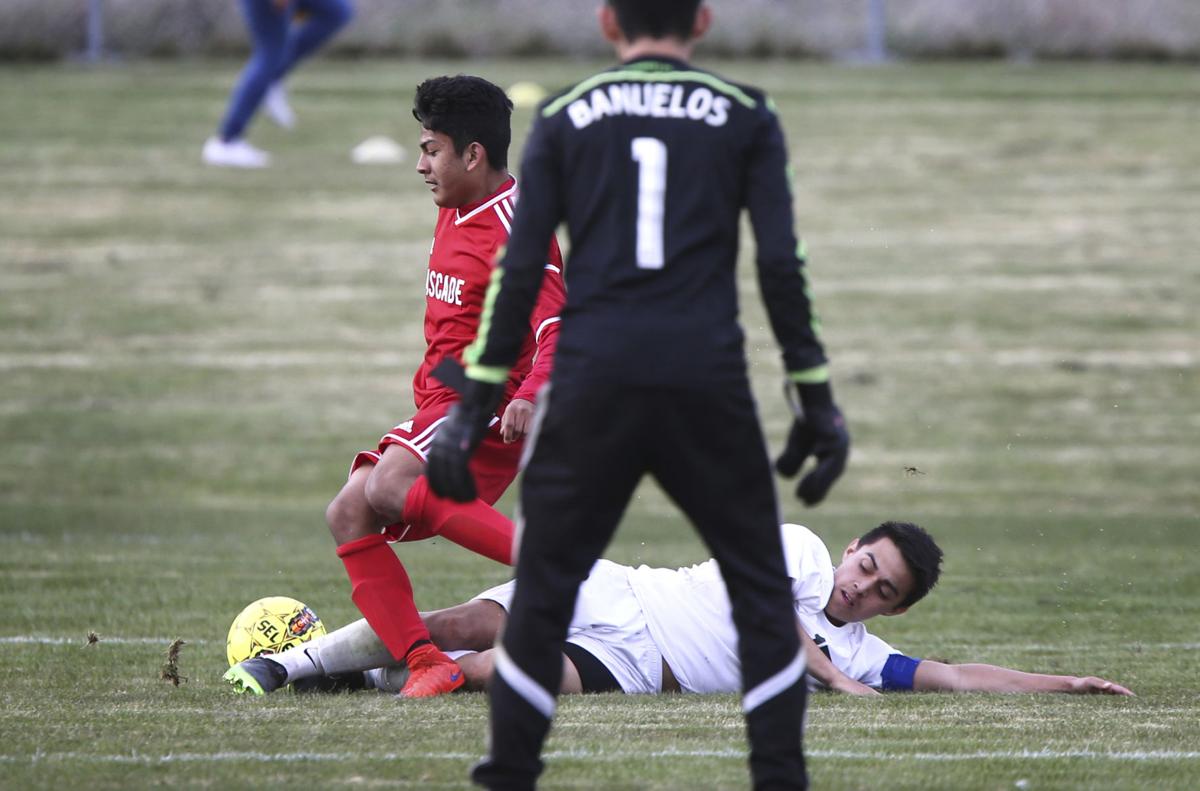 As he nears the goal, Chelan’s Victor Alvarez slides to get the ball away from Cascade’s Arturo Avila, at left, as Chelan goalie Ben Banuelos keeps an eye on the action.

Cascade’s Arturo "Cholo" Avila takes a shot on goal as Okanogan’s goalie Victor Perez tries to defend the shot. Avila scored a whopping 26 goals his freshman year and is Cascades' all-time leader in goals scored with 69 in just three years.

As he nears the goal, Chelan’s Victor Alvarez slides to get the ball away from Cascade’s Arturo Avila, at left, as Chelan goalie Ben Banuelos keeps an eye on the action.

LEAVENWORTH — For anyone who’s attended a Cascade soccer game over the past three years, chances are, you’ve heard the name “Cholo” roar through the stands on more than a few occasions.

Often repeated throughout the game, whenever Arturo Avila touches the ball, fans and teammates howl “Cholo! Cholo!” because they know something special is likely to happen.

Avila, who’s been called “Cholo” since he was a kid, has been one of the most prolific and unstoppable forwards in the state — regardless of classification — since he stepped on the pitch as a freshman. That label might seem lofty, but Avila scored 26 goals his first year on varsity and helped lead Cascade to a perfect (14-0-2) regular-season record and only the second Final Four appearance in school history.

All throughout that season, the name “Cholo” became synonymous with a goal. He scored in nearly every game, sometimes twice. He was automatic. And it’s continued throughout his entire high school career.

Even without a senior season to build on his remarkable scoring numbers, Cholo leaves Cascade as the all-time leader in goals scored after passing Steve Walker (66) in last year’s district playoffs. Avila finishes with 69 goals over his brilliant high school career.

“We have had some really good technical players over the last few years, including Elijah Nash and Raul Matta, but as a forward, Cholo is obviously the best forward I’ve seen since I’ve been coaching for Cascade,” said Jesus Sandoval, who took over the program this year after co-coaching with Pete Spiegel the past five.

“Just being so hungry to score always, Cholo is one of those prime-time players that we will always keep in our memories because of his raw talent.”

Sandoval, who used to play soccer with Avila’s family when Arturo was a kid, always knew Arturo would be able to showcase his talent once he got to high school; he just didn’t know how fast it would come. It became evident pretty early on, though, that Cholo was going to be exceptional.

“He started scoring goals and for a lot of teams in our league, their goal was to not let Cholo score,” Sandoval said. “I can remember a game against Omak and, even though we scored six goals, the defenders were cheering because they didn’t allow Cholo to score. Coaches put three guys on him all the time, which we were like, ‘Alright, someone else can score.’ Once we saw that defenders were completely geared toward just stopping him, we knew he was going to be talented.”

Even with defenders draped around him, Cholo, often the smallest on the pitch, always found room to maneuver past players and find his shot.

“The ball just sticks to his foot,” said Spiegel, who stepped back to an assistant role, “Even when he makes a miss-touch, somehow the ball bounces off another player and comes back to him. The ball just has a way of staying with him. And he can pull the trigger from anywhere on the field; his release is super quick, and he can get the ball off in tight areas.”

Avila torched the Caribou Trail League in his first year with 26 goals and followed it up with 15 more (in 18 games) as a sophomore. Cholo then scored 28 goals in his junior year, passing Walker’s mark against Chelan in the first round of the playoffs.

The record was something Cholo had eyed since his first day of practice at Cascade.

“I remember that first day I was walking through the hallway looking for the soccer records, and when I saw Steve’s I thought I could beat that,” Avila said.

Once he accomplished the feat (in just 54 games), it was an immense feeling of accomplishment.

“I ran over to my brother after I scored, and he told me I finally did it,” Avila said. “It felt pretty great.”

With Avila’s name now above Walker’s on the scoring list, he has forever cemented himself among the top soccer players to ever come through Cascade High School. Though he was never named CTL MVP, Cholo made first-team all-league all three years and earned second-team all-state as a freshman and junior.

After getting knocked out of the state quarterfinals last year, Avila said the team was motivated to make a deep push at state.

“Our senior class was really big (10 guys) and everyone was hungry to try and make it back to the Final Four,” Avila said. “We believed we could have accomplished it because at practice you could see the intensity and drive. Everyone wanted it, and we were connecting.”

With the season now canceled, Avila has started to set his sights on the fall season at Spokane Community College after signing his letter of intent in February.

“I’ll be looking forward to that. I asked him to send me his schedule as soon as it comes out because I definitely want to make some games,” Sandoval said, a sentiment echoed by Spiegel. “I’m confident that he will do great, he has the skills and he’s not afraid to go against top competition.”

Avila said he hopes to eventually transfer to Western Washington University, where he’d like to team up with Eastmont’s Flavio Espinoza and Nate Balauro, whom he played with on the Wenatchee Aguilitas Club team that competed in a pair of national championships.

“I just want to keep going, score as many goals as I can and win a title,” Avila said. “I think (Nate, Flavio) can do that at Western.”