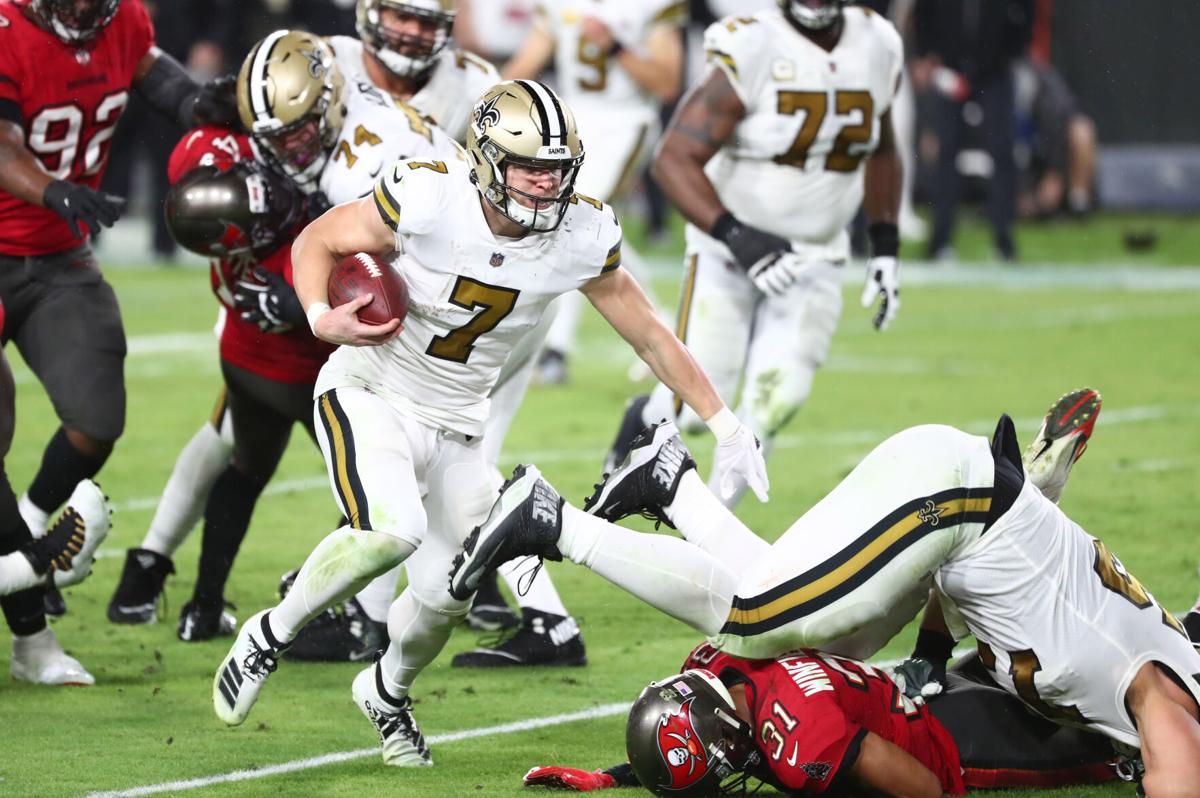 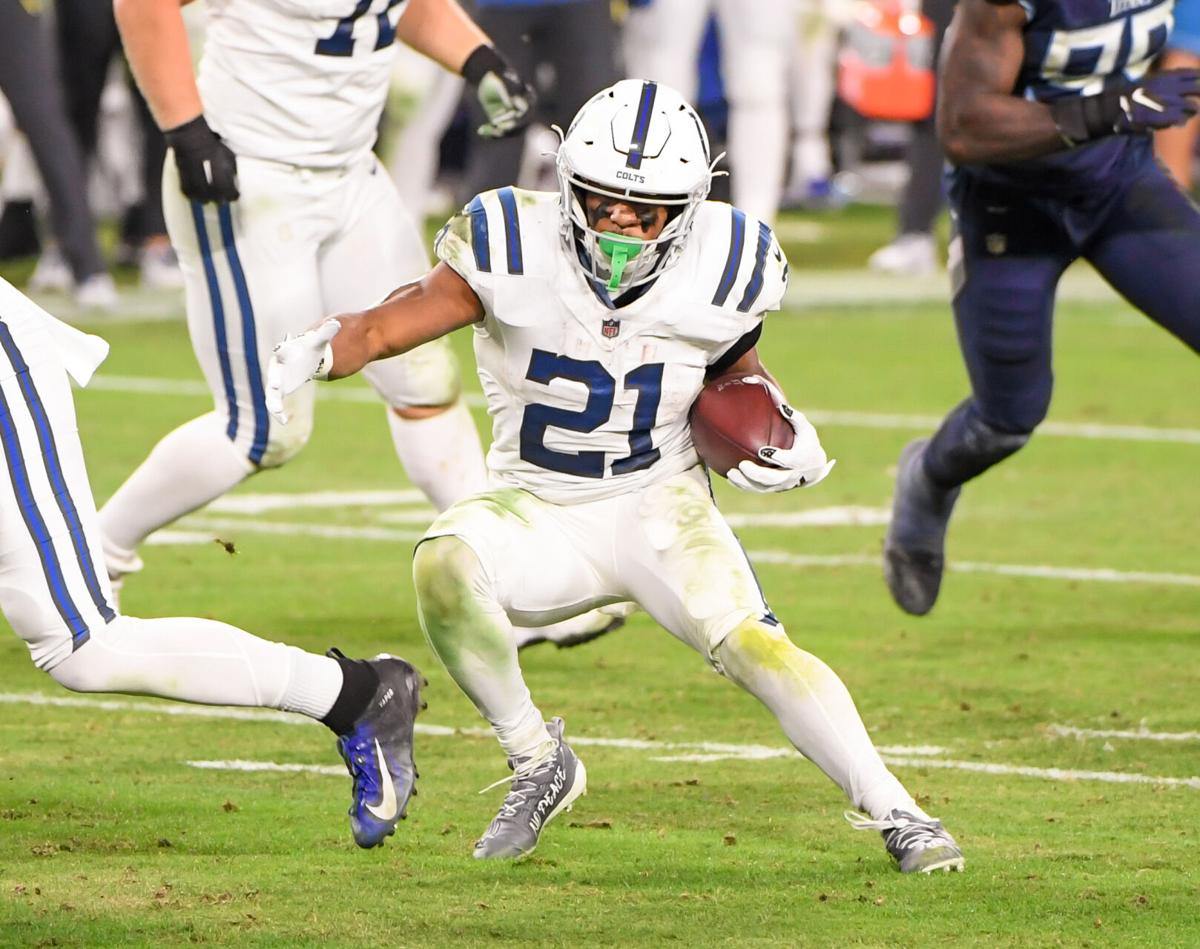 Indianapolis Colts running back Nyheim Hines (21) runs against the Tennessee Titans during the second half last week. He's been a spark-plug for the Colts offensively. Steve Roberts/USA TODAY Sports 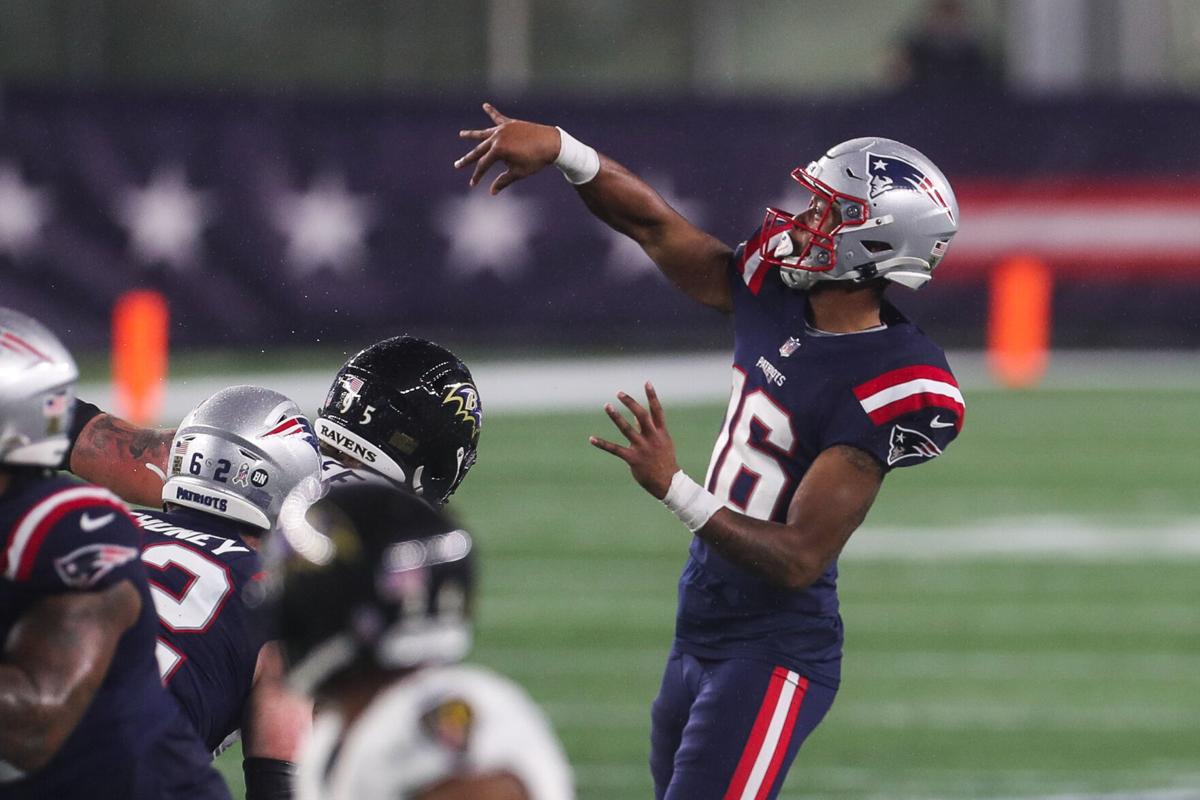 New England Patriots receiver Jakobi Meyers (16) throws a touchdown pass during the first half against the Baltimore Ravens. Meyers has been the Pats best receiving option this season and could be in for a big day against the Texans. Paul Rutherford/USA TODAY Sports

Indianapolis Colts running back Nyheim Hines (21) runs against the Tennessee Titans during the second half last week. He's been a spark-plug for the Colts offensively. Steve Roberts/USA TODAY Sports

New England Patriots receiver Jakobi Meyers (16) throws a touchdown pass during the first half against the Baltimore Ravens. Meyers has been the Pats best receiving option this season and could be in for a big day against the Texans. Paul Rutherford/USA TODAY Sports

With the trade deadline quickly approaching, these next 14 days are pivotal for Fantasy Football managers looking to bolster their squad before the playoff run, beginning in just three short weeks.

Because generally at this point, two or three teams have separated themselves from the pack and it’s really down to a handful vying for the final few playoff spots — depending on how many teams advance to the postseason in your league.

I’m in three different leagues myself and am securely in the playoffs in each one. But that doesn’t mean I’m relaxing or overlooking the typical roster analysis I do in a typical week. I’ve written about this in past columns, but if you want to consistently be good in fantasy football, you need to put in the time doing the research.

Sure, luck is involved with injuries or longshot draft picks that pan out. But once you get into the season and live bullets start flying, seasoned owners distinguish themselves from the casual fans. Anyone can get lucky in the draft; fantasy football is won on the waiver-wire and by out-foxing the rest of the league.

There’s a reason why your neighbor/friend/co-worker, let’s call him Bill, repeatedly finishes at the top of your league’s regular-season standings. He hunkers down for a few hours each week, reads up on all the fantasy football analysis, is active on the waiver-wire and scours opposing teams’ rosters.

He looks ahead, instead of relying on past production, and targets players who are often overlooked or who might have struggled in a couple of games but have an optimal schedule in the back half of the season.

His goal is to just get into the playoffs. Because he understands that it’s all a crapshoot over the final three weeks in a single-elimination format. Some players emerge as fantasy stars — or produce a couple of duds — for that portion of the season only; starters get hurt or are rested; some offenses get a string of games against bottom-five defenses.

It’s cliche, but anything can happen in the fantasy football playoffs. You just need to make it there.

Taysom Hill, Saints: Sean Payton shocked most NFL experts when he announced Friday morning that Hill would start at QB for New Orleans in place of the injured Drew Brees and presumptive backup Jameis Winston. That makes Hill a must-add in all fantasy formats, especially given that he is listed as a tight end this week. Hill is still available in 75% of ESPN leagues, so grab him if he is available. Hill has been a Swiss army knife for the Saints over the past few years, but he’s shown an ability to toss the deep ball as well. I think he is in for a huge day against the division-rival Atlanta Falcons. Hill should be looked at as a No. 1 tight end and top 10 QB this week.

Ben Roethlisberger, Steelers: At least in my opinion, with 22 touchdowns, just four picks and the Steelers at (9-0), Big Ben has been the NFL’s Comeback Player of the Year. He’s on pace to have the best season statistically in his Hall of Fame career, and he finally has a trio of dynamic receivers. He’s still just the No. 11 QB in fantasy football, but against the Jags Roethlisberger is a top-5 option. Jacksonville has allowed multiple passing touchdowns in all but three games and their pass rush hasn’t mustered any kind of threat. Expect the Steelers to roll over the Jaguars.

Carson Wentz, Eagles: Even though the Browns have already ruled out Myles Garrett and placed him on the COVID-19 list, the weather is expected to once again be bad in Cleveland on Sunday. If it’s as blustery as this past weekend, neither team will be looking to throw the ball a ton. But even if the weather is nice, I don’t think you can trust Wentz at this point in the season. He’s too careless with the football and the Eagles have looked abysmal offensively. Steer clear of Wentz this weekend and dump him if you can grab Taysom Hill.

Aaron Rodgers, Packers: Most weeks Rodgers is a set-and-forget type of quarterback, impervious to stout defenses and tough road matchups. Not this week though. I’m going out on a limb and saying that Rodgers has his one stinker of the season this week against Indianapolis. The Colts own the league’s best pass defense and have held opposing quarterbacks to less than 18 fantasy points in all but two games so far this season. Rodgers is getting Allen Lazard back this week, which should help, but the Colts have been hellacious defensively.

Nyheim Hines, Colts: One of the hottest waiver-wire additions this week, Hines has carved himself a nice role in the Colts offense over the last couple of weeks. He’s such a dynamic threat out of the backfield, he’s drawn comparisons from NFL executives to Alvin Kamara and Darren Sproles — which is good company. Considering how Phillip Rivers loves to dump the ball off to his running backs, I think Hines will be a top-20 running back the rest of the year. He gets the Packers and their 31st ranked rush defense this week, so make sure Hines is in your starting lineup if you grabbed him.

Adrian Peterson, Lions: I prefer to select at least one sleeper as a must-start each week and Peterson fits that bill with the Lions announcing on Thursday that D’Andre Swift would miss Sunday’s game due to a concussion. That means Peterson should be in for a heavy workload and against the Panthers, that could mean top-15 value. Only six other NFL teams have allowed more rushing yards than Carolina, and with Teddy Bridgewater potentially out, the Lions should dominate. If Detroit can get ahead early, Peterson could get 20 carries and push for 100 yards. If you’re looking for a last-minute QB, Peterson is a solid option.

James Robinson, Jaguars: Robinson has shined in his rookie season and is currently the No. 5 back in fantasy football, but I’ve said all year the Steelers are the worst matchup for opposing RBs. Pittsburgh has the league’s best rush defense and has allowed only five rushing touchdowns all season. I think the Jaguars should be able to put up some points, but Mike Tomlin will force the Jags to beat them through the air. It’s going to be tough sledding for the Jaguars’ run game.

Ezekiel Elliott, Cowboys: On paper, the Vikings present a pretty good matchup for the Cowboys’ offense. But Zeke has averaged less than four yards a carry in each of the past three games, and Minnesota hasn’t allowed a rushing touchdown since Week 5. The Vikings have been surging over the last month, I think they take it to the Cowboys at home and cause the NFC East even further embarrassment. Even coming off a bye, sit Zeke this week and hope the run game shows improvement.

Jakobi Meyers, Patriots: Meyers didn’t show much with the Patriots in his rookie season last year, but he has emerged as their top (and really only) receiving option the past few weeks. He and QB Cam Newton clearly have good chemistry with one another; he’s drawn 37 targets over the past four games and threw a nifty 24-yard touchdown pass to Rex Burkhead last week against the Ravens. I expect Meyers to be busy this weekend against the Texans and lead the team in targets, which means he’s a solid flex play.

Justin Jefferson, Vikings: Jefferson got back on the horse last week after a couple of down games, drawing double-digit targets and racking up 135 receiving yards. Kirk Cousins can deliver the ball downfield when he has a complementary run game and the Cowboys have been the fifth-most generous with respect to WR fantasy production. I like both Adam Thielen and Jefferson to catch a handful of passes and get into the endzone.

Robert Woods, Rams: While I think Woods is a player to target over the next week, he has a tough matchup this week against the Tampa Bay Buccaneers. Jared Goff has been spreading the ball around a lot, which helps the Rams but frustrates fantasy owners. Woods is a reliable option for Los Angeles, so he has a decent floor, but I would temper expectations this week on the road Monday night against the league’s ninth-ranked pass defense.

Mike Evans, Buccaneers: I’m going to stay with the same game, not just because I’m lazy but Evans will likely be shadowed by Jalen Ramsey, who just shut down DK Metcalf. The Bucs also have an embarrassment of riches at the wide receiver position with Chris Godwin, Antonio Brown, Scotty Miller and Rob Gronkowski at tight end. If Ramsey shadows Evans all game, Tom Brady and the Bucs might be forced to look elsewhere.

No. 1 Gonzaga, No. 6 Kansas tangle in top Thanksgiving tilt

Two things to know about the Seahawks' Week 12 opponent, the Eagles