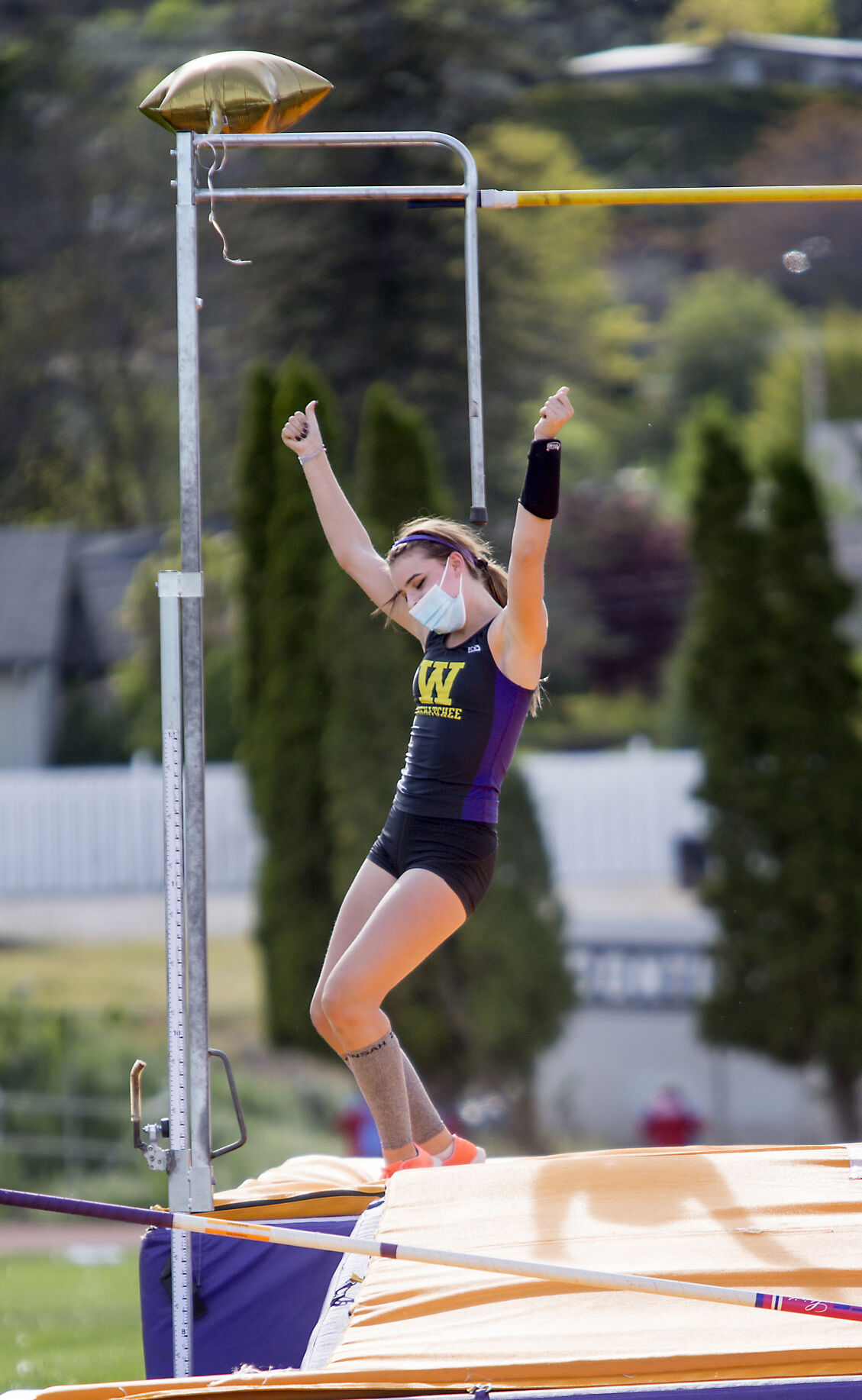 World photo/Don Seabrook Wenatchee sophomore Courtney Dodge celebrates hitting her second of three personal best heights she cleared in the pole vault during a meet with Eastmont at Wenatchee High School Thursday, April 29, 2021. She won the event with her vault of 9-feet, 6-inches. 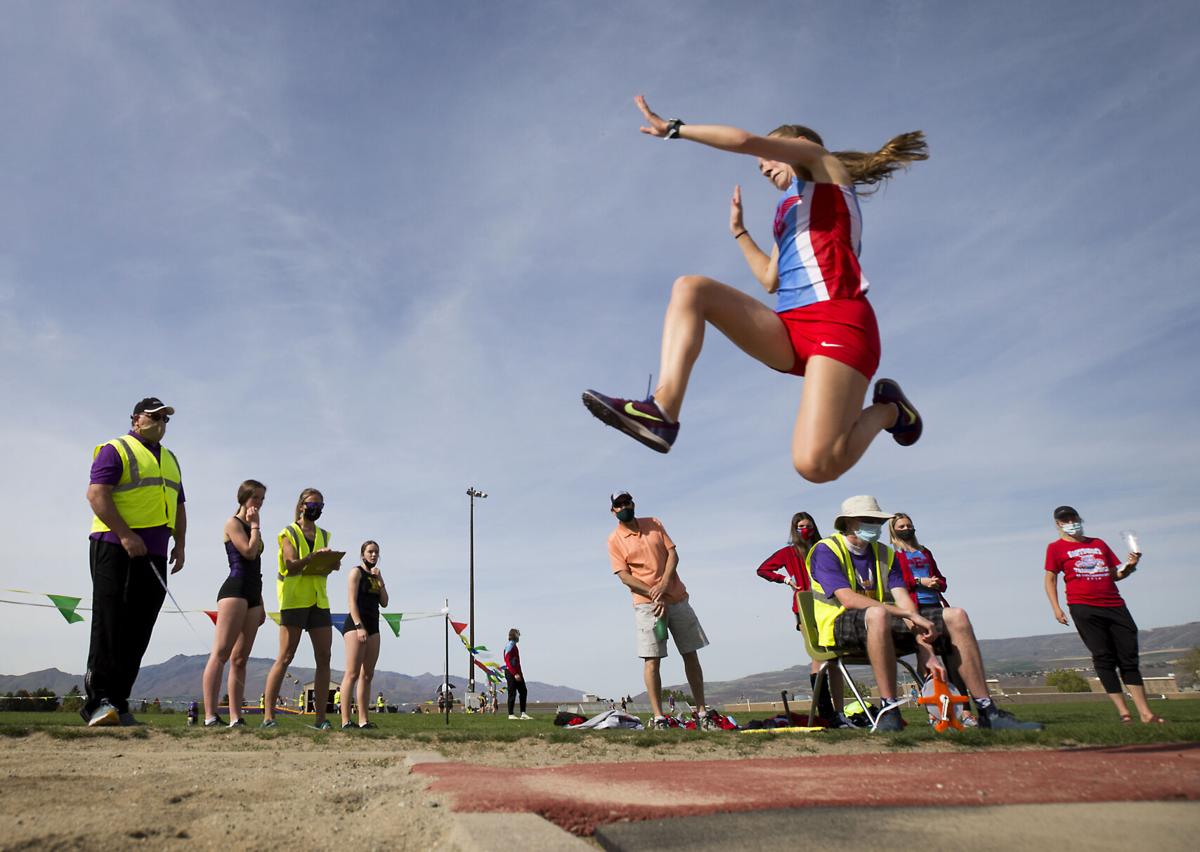 World photo/Don Seabrook Wenatchee sophomore Courtney Dodge celebrates hitting her second of three personal best heights she cleared in the pole vault during a meet with Eastmont at Wenatchee High School Thursday, April 29, 2021. She won the event with her vault of 9-feet, 6-inches.

WENATCHEE — The Eastmont boys might have swept the sprint events, but Wenatchee dominated the distance runs at their home track meet Thursday against the Wildcats and Cascade Christian Academy.

Junior Ian Eifert held off Eastmont’s Ethan Child in the 1600m with a (4:48.10) and finished nearly 10 seconds ahead of teammate Liam Newman to take first in the 3200m.

“What’s crazy is the way the schedule is, the 2-mile (3200m) is the second to last event of the meet,” Wenatchee head coach Steve Roche said Thursday. “Ian set a personal record (PR) in the 3200, which is the third-fastest time in the region, and then 10 minutes later he turned around and ran a fantastic 4x400 relay split (54.2), which almost tied his previous PR in that. The kid is just a tremendous athlete.”

“Johnny had a great meet,” Roche said. “Last week he won his events but he didn’t have his best times. This week he really stepped it up and nearly set lifetime records in both hurdle events. He looked a lot sharper even though he hit the last hurdle and stumbled a little bit but overall I was really pleased. He and Bryce Row (Eastmont) have been leapfrogging each other but he got his spot back.”

Eastmont senior Max Prazer eked out a win in the shot put, out-throwing Sim Cass by two inches with a PR (44’ 6). Cass’s (44’ 4) was also a new PR for the Wenatchee senior. And then the Wildcats cruised through most of the jump events, as Eamon Monahan won the high jump easily, clearing (6’) — six inches above everyone else — and Row took first in the long jump and triple jump.

For the girls, Wenatchee’s Zoe Gonzales continued her supremacy in the sprint events, earning two more wins in the 100m and 200m and setting a new PR in the 100m with a (12.76). The Panthers won essentially every running event aside from the hurdles, which went to Eastmont’s Kylie Roozen, who ran a (17.19) in the 100m hurdles and (50.09) in the 300m hurdles.

“The Wenatchee girls have a solid team with a lot of depth,” Eastmont head coach Gary Millard said Thursday. “But I thought our girls did a good job and they are working hard and improving every week.”

The Panthers won every throw and jumping event except the discus, which Eastmont sophomore Ellie Prazer won with a massive throw of (108’ 5) — more than 10 feet past Wenatchee’s Nora Gutzwiler.

It seemed like everyone set a new PR in the jumping events as Haven Ploch set a new career-best in the high jump, clearing (5’ 3). Sophomore Courtney Dodge won the pole vault with a PR (9’ 6). Elise Baier took first in the triple jump with a PR (30’ 3.5) and both Jenissa Hepton and Eastmont’s Dylan Schmitten set new PR’s in the long jump with a jump of (15’).

“It was a hot one, but overall it was a great meet,” Roche said. “It was the first home meet we’ve hosted since 2019 and it felt good to get out on the track again and compete against an Eastmont team that always pushes us. There were a lot of great marks today.”

Two more meets are left on the schedule, but both Eastmont and Wenatchee will get to compete against each other again next week in the Central Divisional Championships. As of now, it’s scheduled for Saturday, May 8 at Wenatchee High School. But that could be subject to change, Roche said.

The track season will conclude on May 15 with the NCW Regional Championships at Eastmont High School, pitting the top 24 kids in each event out of every school in the North Central Region.

After weathering year that 'could have been so much worse,' UW Athletics' financial outlook hinges on football capacity this fall

Sounders' Frei to miss at least a month with sprained knee, Delem likely out for season with torn ACL

Mariners fall to Dodgers, drop below .500 for second time this season

WNBA to debut a new in-season ‘Commissioner’s Cup’ tournament. Here’s how it works.