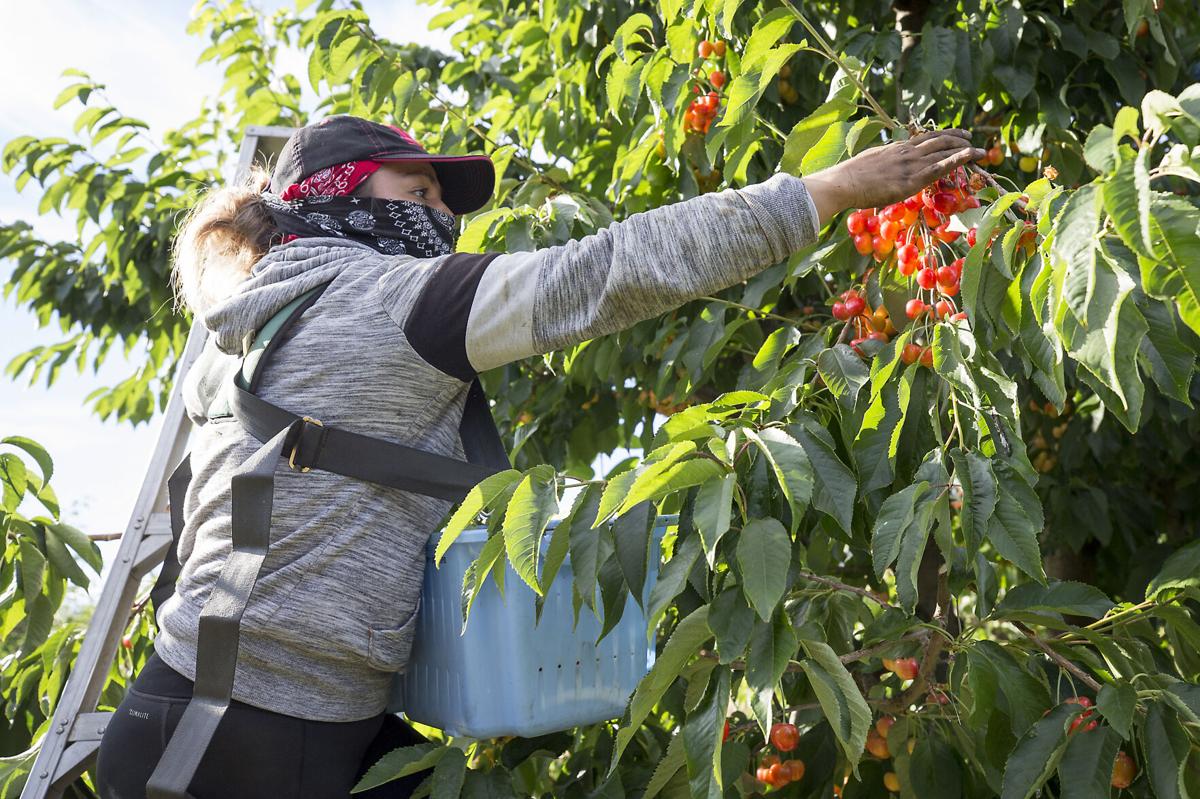 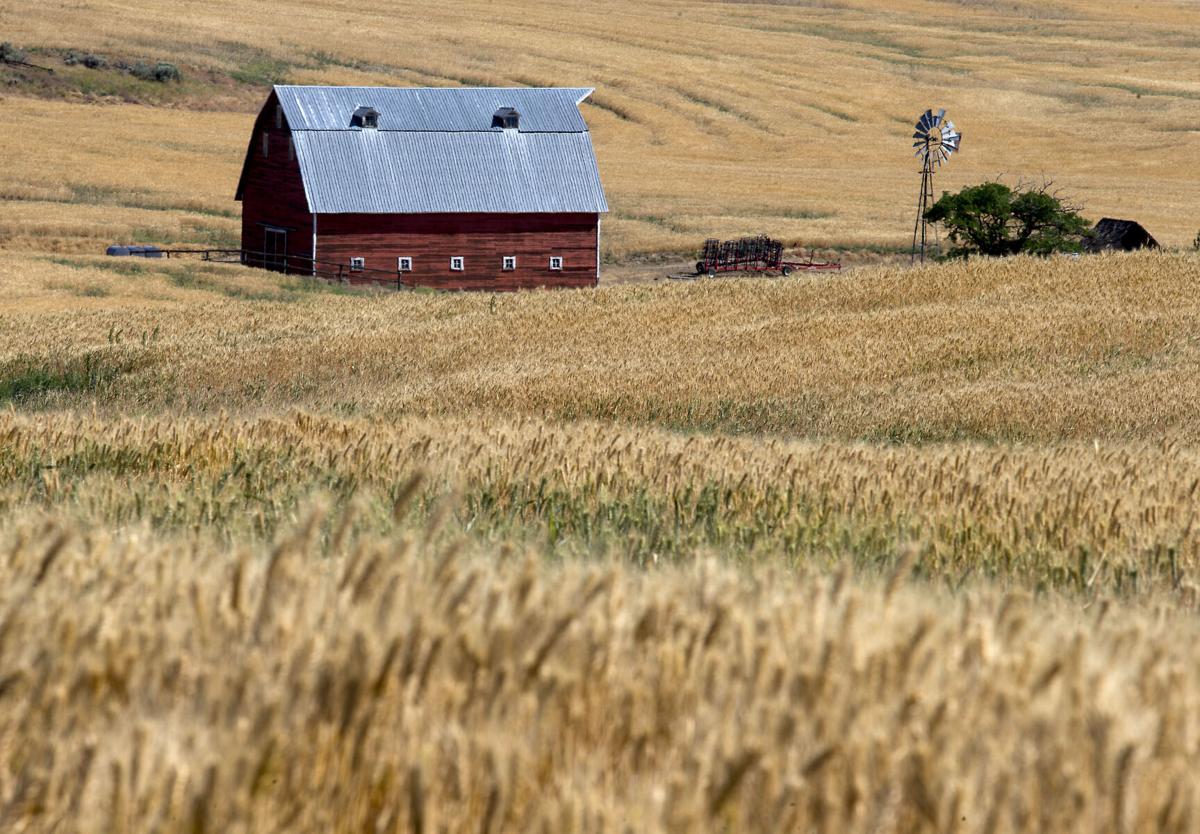 A barn on Badger Mountain is surrounded by wheat on July 15. Record-breaking temperatures and drought conditions have reduced the yield and quality of this year's crop. 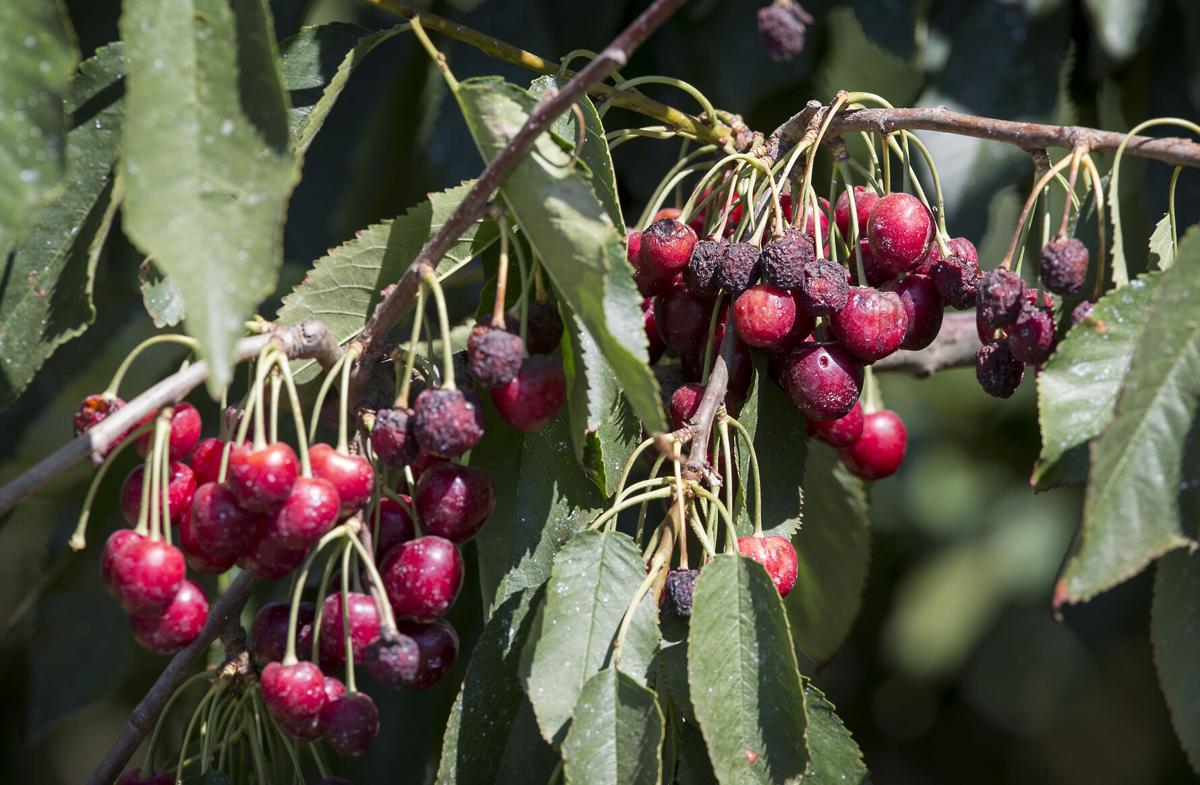 Some cherries, like these in an East Wenatchee orchard seen July 15, were left unharvested because of the heat.

A barn on Badger Mountain is surrounded by wheat on July 15. Record-breaking temperatures and drought conditions have reduced the yield and quality of this year's crop.

Some cherries, like these in an East Wenatchee orchard seen July 15, were left unharvested because of the heat.

EAST WENATCHEE — At Columbia Valley Cherries' 7-acre orchard June 25, Heidi Benitas reaches for large Rainiers, furiously picking them into a pale blue lug hanging from her shoulders. Across rows of trees pickers hurry from one set to another.

In the Wenatchee Valley as temperatures soar, orchardists with tree-ripened cherries are in a race to harvest their valuable crop. When it gets into the 100s, the fruit begins to soften inside, making it less desirable to sell. Fruit on the tops of trees is prone to sunburn.

"We really need to get them off before it gets to triple digits," says Daiam Navarro, one of the supervisors.

It's 7:30 a.m. in the CVC orchard and a crew of 15 pickers is coming off their lunch break. They can only pick cherries until it is 80 degrees outside, so they started at 3 a.m. using headlamps to guide their fingers which are taped for protection. A second 15-picker crew started at daylight. As the temperature rises, all of them will be told to quit in about two hours.

Every minute counts as the pickers climb up and down ladders, pull cherries off by the stems and a support crew of five hands out empty lugs, collect full ones, and punch tickets to keep track of every picker's payment.

Navarro, directing pickers to their trees, radios Jim Triggs, a retired Alaska Airlines pilot, that she needs more lugs for her pickers. They are just topping off the 23-pound container of cherries they have strapped to their shoulders. "I can be there in 3 minutes," Triggs replies. "Can you get here sooner?" says Navarro. "I'll put it in another gear," says Triggs.

Getting workers has been a struggle for orchardists in the valley, said Conrad Crane, another support crew member. They advertise on Facebook and Spanish-language social media pages. They have increased what they pay for each lug of fruit to entice more workers.

Nearly all of what they grow are Rainier cherries that require picking for color and size as well as careful handling for the delicate skin, Crane said. Because Rainiers take more time to pick, pickers earn $6.75 for each lug they fill at CVC, said Navarro. That's up from $6 last year. They pay the same rate for picking their Bing pollinators, up from $4 last year.

Even with the hectic rush to get cherries off the trees and to the warehouse, Navarro smiles as she walks alongside a crew, ladders in hand, to another section of the orchard as the harvest continues in earnest. "It's like graduation," she says. "Every year all our hard work pays off."

WENATCHEE — In operation for 114 years, this year's heat has been unlike anything the family-owned Stutzman Farms has experienced.

"My dad is 97, and he's never seen temperatures this high, this early in the season, and for this many days in a row," Floyd Stutzman said in early July, when the temperatures had hit triple-digit records for several days. "Sweet cherries do not like hot weather, because it brings the maturity on faster, and it can shrivel on a tree."

Floyd and Betsy Stutzman own and operate the Stutzman Ranch in Wenatchee, which grows Bing and Rainier cherries. The ranch opened in 1907 and is in its fourth generation of family ownership.

The loss of fruit at Stutzman farms will result in a financial impact of more than $10,000 as a result of the heat wave.

"You've got under-ripe, that maybe are a little less colored underneath, and then you got the ones right in the middle that are nice. And then you got shriveled ones at the top," Stutzman said. "It just makes harvest a real challenge."

Stutzman said the heat bakes cherries on the top of the tree and estimated that his farm could lose 30% of his crops this year compared to a normal harvest.

DuPont said local orchardists have taken steps to reduce heat stress on trees. These steps include irrigation and overhead cooling in an attempt to protect the cherries.

Since Stutzman Farms is U-pick, Stutzman said the impact would be less than some of the other growers. Customers who drive to the farm are less picky about the fruit they harvest, he said.

"Compared to maybe some of the commercial growers that can even pick at all, or lost half of it, we're doing good. I feel fortunate," he said.

The heat has also shortened the window that farmers have to pick their crops. While Stutzman said he typically has around two weeks to harvest cherries, this year they will only have about a week before the cherries go bad.

Typically, cherries are harvested when temperatures are in the 70s or 80s.

On July 14, Gov. Jay Inslee declared a statewide drought emergency which only excluded the Seattle, Tacoma and Everett metro areas.

The drought this year is unique, says Amber Betts, a spokesperson for the state Department of Agriculture.

"What the general consensus is that it's a pretty rare type of drought," Betts said. "We got enough snowpack, that was pretty good. But we didn't see enough rain, so we are particularly being impacted in our dryland producing areas."

Paul Katovich, the CEO of Highline Grain Growers, which has nearly 3,000 members in Eastern Washington, said some farmers are seeing up to a 50% decrease in their crop yield this year and the temperatures and lack of moisture have increased the amount of protein in wheat. Katovich said generally, the lower the protein content the better.

The white wheat produced in the Pacific Northwest is unique, Katovich said. It is used to make crackers, cookies, cakes and other baked goods in Asia, where consumers are more sensitive to textures and higher quality products.

"So when we have quality problems, then we have problems servicing those contracts with our overseas buyers," Katovich said. "This is the weirdest start, and probably the most difficult year I've seen in my career."

The heat has hit the cherry and apple crops as well.

"We think we probably lost about 20% of the crop," Thurlby said, adding that growers simply had to abandon a portion of the heat-damaged cherries in their orchards.

The heat wave's impact on Washington's $2 billion apple crop — the state's most valuable agricultural product — is uncertain, as harvest is still weeks away. Apple growers are used to sleepless nights as they respond to springtime frosts, but have little experience with sustained heat in June.

"We really don't know what the effects are. We just have to ride it out," said Todd Fryhover, president of the Washington Apple Commission.

Growers have been protecting their orchards with expansive nets that protect fruit against sunburn, and by spraying water vapor above the trees. Apples have stopped growing for the time being, Fryhover said, but it is possible the crop may make up for lost time if weather conditions normalize.

YAKIMA — The tree fruit industry's latest trends and hot topics will be presented in person this December as the Northwest Hort Expo returns to its traditional format.

The event, organized around the Washington State Tree Fruit Association's annual meeting, serves as a forum to discuss what's happening in the industry and to connect with the providers of horticulture services and cutting-edge technology.

Set for Dec. 6-8 at the Yakima Convention Center and Sun Dome, this will be the tree fruit group's 117th annual meeting. The NCW Fieldman's Association and Yakima Pom Club co-host the trade show part of the event, which rotates between Wenatchee, Yakima and Kennewick. The expo and conference typically attract between 1,800 and 2,000 attendees.

"Last year, we had great participation for moving to an online platform," WSTFA spokesman Tim Kovis said. "We had over 1,400 registered attendees, but we know that some people watched it together or shared their registration. We felt it was a success given the dynamic we were faced with and got positive feedback."

Now that pandemic restrictions have eased, members are wanting the face-to-face experience, he said, though it's possible some remote-access options might be incorporated.

"We will still be looking at some options for streaming parts of the meeting, but no decisions have been made," he said.

If interest from sponsors and participants in the organization's Aug. 31 scholarship golf tournament at Highlander Golf Course is an indication, "we anticipate a strong attendance" at the expo, he said.

Vendors interested in participating in the expo can go to nwhortexpo.com. To get updates on the annual meeting, including educational content, visit wstfa.org/annual-meeting.

WENATCHEE — The U.S. Bureau of Reclamation notified Congress Aug. 5 of its intent to transfer ownership of the Greater Wenatchee Irrigation Di…

For the Record | Business licenses

Eye On | The Paradise Restaurant

Bradi Dahmen | Steps to evaluate a retirement plan for your business

Kris Johnson | What will it take to double Washington’s manufacturing sector?