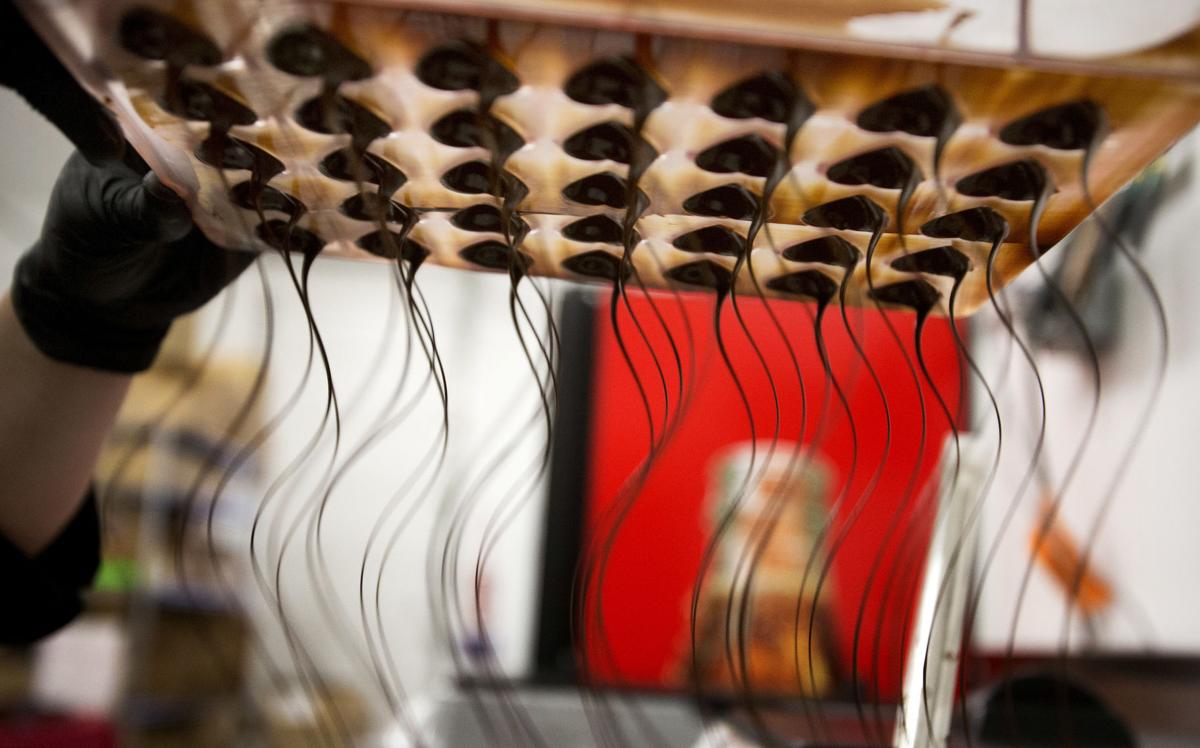 Willow Merritt, owner of Yeti Chocolates, empties warm chocolate from the centers of heart-shaped molds so she can later insert ganache to create a finished confection. 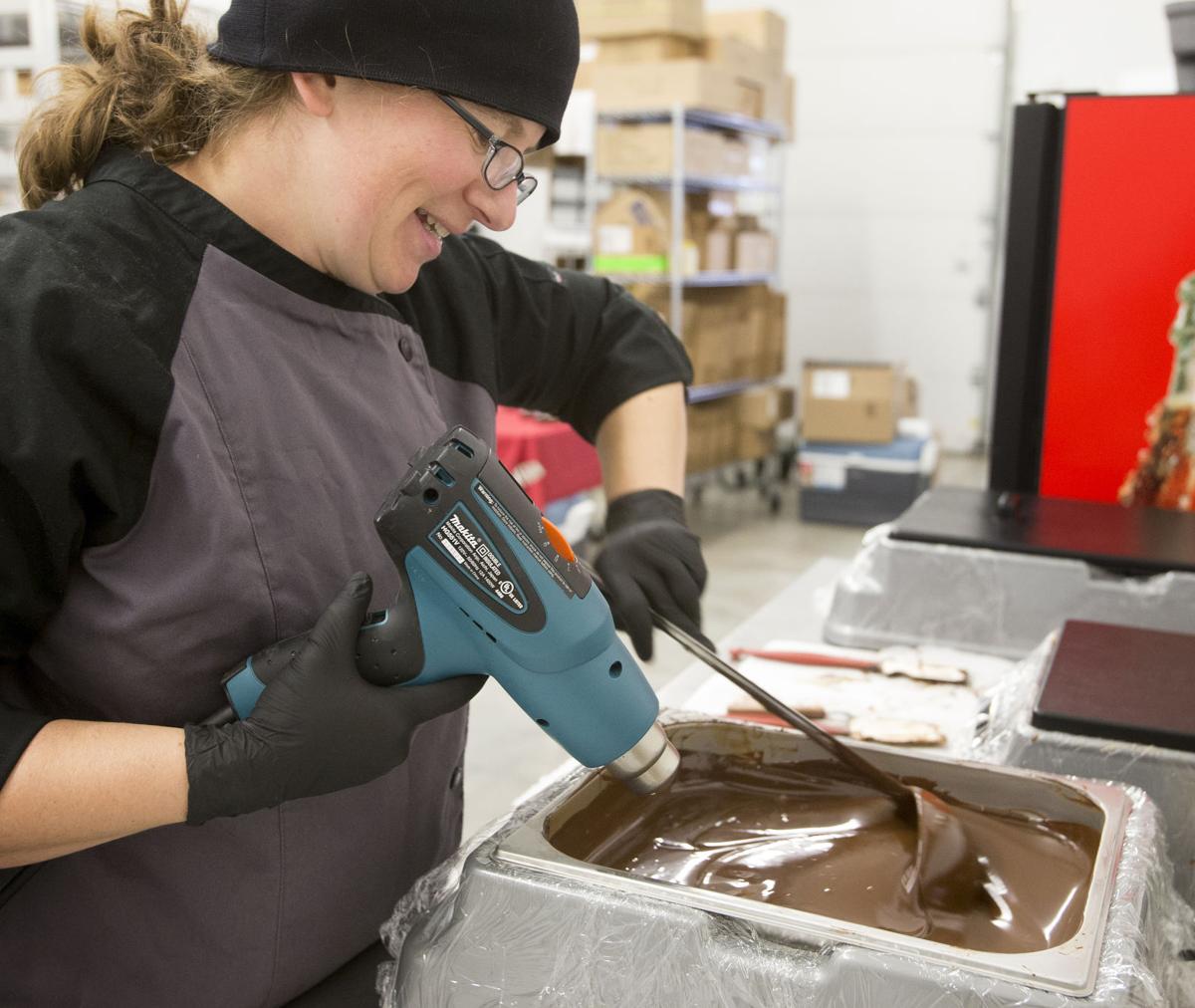 Willow Merritt uses a heat gun to temper chocolate, increasing the temperature just a few degrees while making confections. She operates Yeti Chocolates out of a Rock Island warehouse. 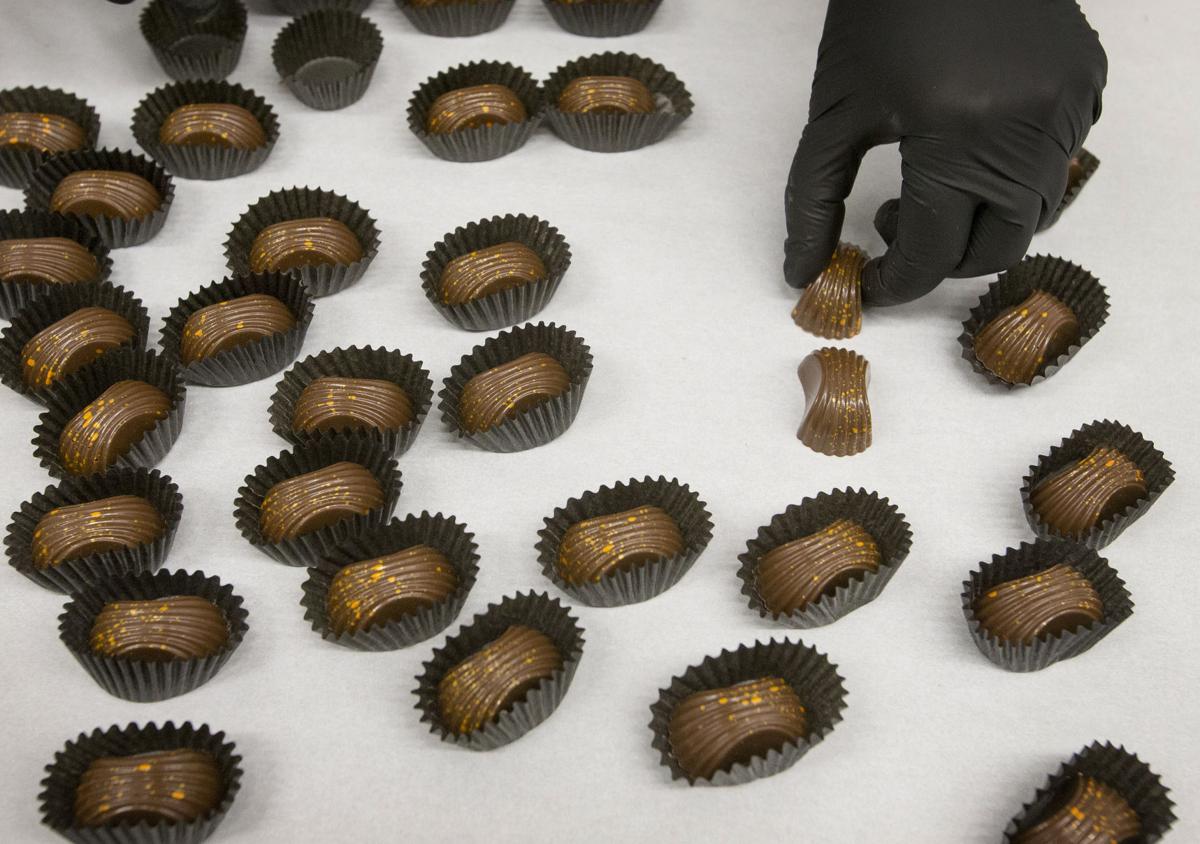 Merritt puts wrappers around one of her hotter sellers — milk chocolate salted caramels. 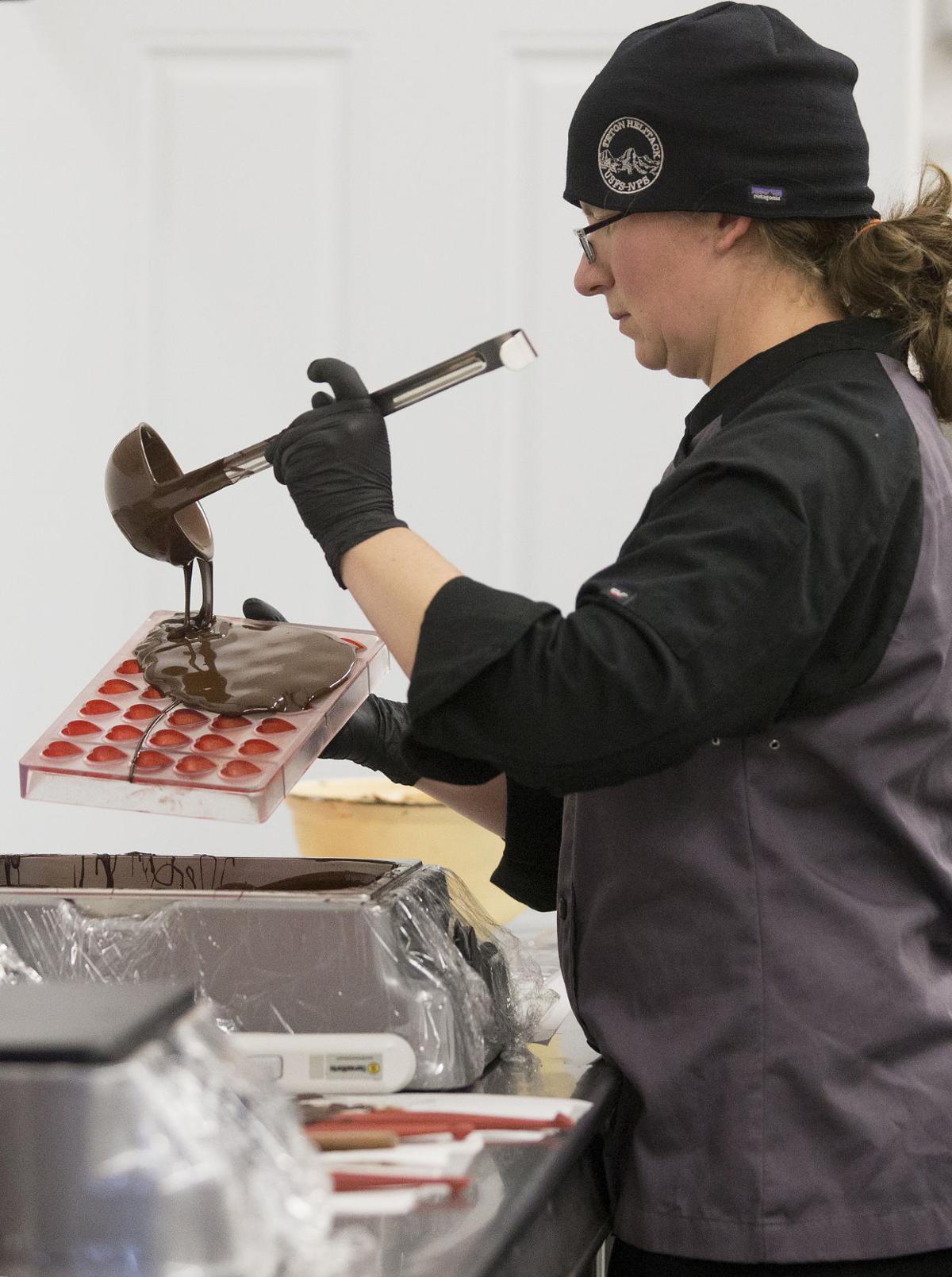 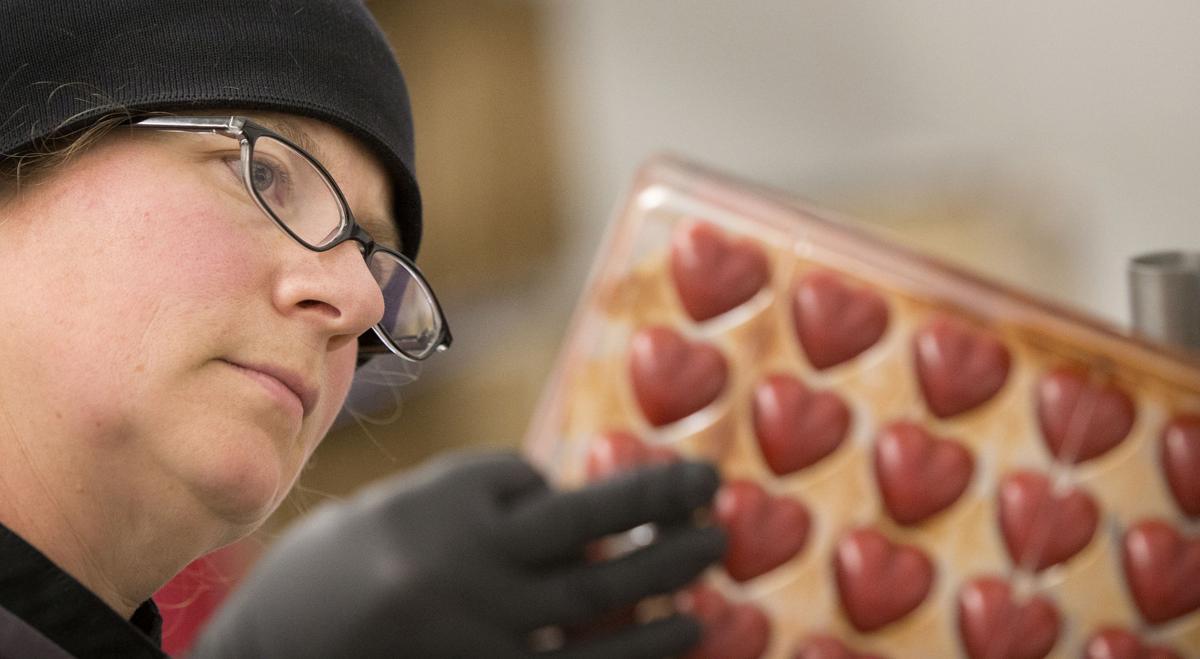 Merritt scrapes excess chocolate from the outside of heart-shaped molds. 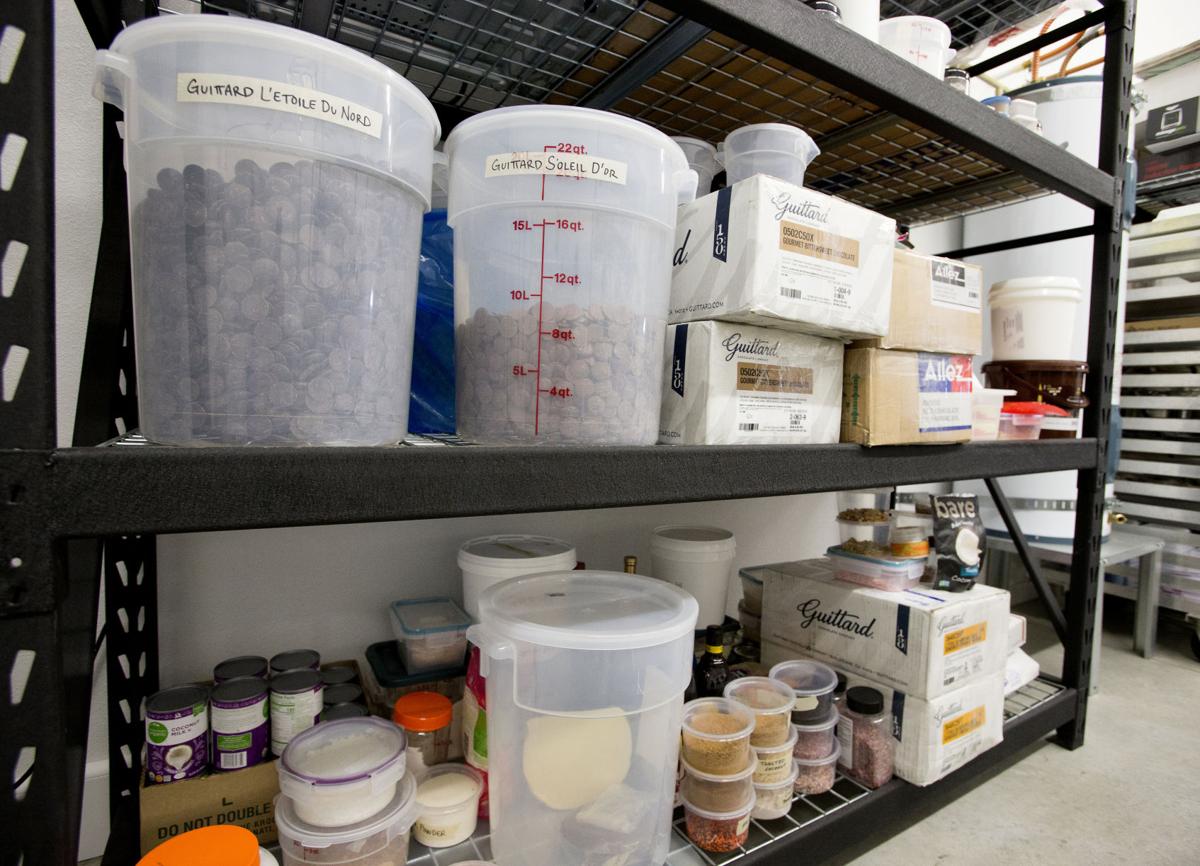 Raw ingredients are organized in the Yeti chocolate workshop in Rock Island.

Willow Merritt, owner of Yeti Chocolates, empties warm chocolate from the centers of heart-shaped molds so she can later insert ganache to create a finished confection.

Willow Merritt uses a heat gun to temper chocolate, increasing the temperature just a few degrees while making confections. She operates Yeti Chocolates out of a Rock Island warehouse.

Merritt puts wrappers around one of her hotter sellers — milk chocolate salted caramels.

Merritt scrapes excess chocolate from the outside of heart-shaped molds.

Raw ingredients are organized in the Yeti chocolate workshop in Rock Island.

Editor’s note: A version of this story first appeared in the December issue of the Wenatchee Valley Business World.

ROCK ISLAND — After nearly two years in business, Yeti Chocolates now has products available at businesses and events throughout North Central Washington. The business is based out of a commercial kitchen in Rock Island and operated by one woman: owner and founder Willow Merritt.

The magic? Artisanal chocolates that look as good as they taste. Merritt makes truffles, chocolate bars and a handful of other treats in her Rock Island commercial kitchen.

“I work really hard to make this product because I believe you eat with your eyes first and I enjoy making pretty-looking chocolates,” she said.

Her chocolates are known for their colorful designs and patterns, but also for their unique flavors, including red wine ganache, Earl Grey, lemon cardamom, mango Thai chili and huckleberry creme. She also offers her chocolates in vegan and dairy-free versions.

“I use really high-quality ingredients, I don’t use preservatives, and I try to make as much from scratch as possible and I feel like that really makes a difference,” she said. “Once people have it, they’re like ‘Holy crap, this is so much better.’ ”

She said many of her customers are “foodies” who appreciate local, artisanal foods.

“There are those who do appreciate that this is a rare thing in this valley and they want to take advantage of it,” she said. “The thing that I say is ‘The chocolates sell themselves.’ I really don’t have to do that much. The biggest hurdle is getting people to try it.”

Merritt has been making chocolates for more than a decade. She is classically trained in French patisserie, having attended a culinary arts school in Portland and worked as a baker. She’d been toying around with the idea to start her own chocolate-making business since 2006, but the opportunity finally arose in 2017. Merritt worked two back-to-back fire seasons as a firefighter before she could afford to leave her job with the Forest Service and rent a commercial kitchen.

Business is good, she said, but there’s still more to be done.

“I’m on a moderate growth pattern with my business. Even having been in business for two years now, it’s amazing how many people don’t know who I am,” she said. “It feels like this valley is really small, but really it’s very big.”

While she has her chocolates in wineries, chocolate shops, bookstores, bakeries, boutiques and art galleries from Quincy to Manson, she’s looking at how to grow.

“I’m having growing pains right now, essentially. That’s where I’m at,” she said.

Merritt said she’s averaging between 1,500 and 2,000 truffles a month during her busy season and she went through around 500 pounds of chocolate last year. She expects those numbers to increase this year.

Her next goal for the business is to hire someone to take over marketing responsibilities.

It’s that passion for her work that keeps Merritt motivated.

“I really just love working with chocolate. I have yet to have a day that I have dreaded going to work in the almost two years I’ve been doing it. I still enjoy going to work,” she said. “I will say, running a business is really hard. There are moments when I feel totally overwhelmed, but just going out and working with the chocolate is very therapeutic for me.”

“I love doing events. That’s one avenue I’d like to explore,” she said. “The biggest challenge of making chocolates is I don’t use preservatives and so they don’t have a long shelf life. The nice thing about events is you make it and it goes away.”

What's behind the name?

"When I was in college I took a ceramics class and one of our final projects was to create a shoe and something else. So I made a snowboarding boot with a Yeti (abominable snowman) popping out the top. When I was trying to come up with the name for my business in 2006, my boyfriend at the time said I should name it something mythical, like “Kraken Chocolates." Instead I drew inspiration from that ceramics sculpture and Yeti Chocolates was born. And yes, I still have the sculpture."

She also appears consistently at Pybus Public Market with other local artisans to sell her chocolates. There, visitors can sample her work. Merritt often uses the truffles that don’t come out perfectly as free samples.

This December she will be one of 10-12 small business owners at the Peoples Marketplace downtown. The event is sponsored by Peoples Bank and will be hosted in the old Mills Bros. space, 10 S. Wenatchee Ave., for the month of December.

“The beautiful thing about this space for me personally is that I’m going to have a giant display of my chocolates so people can put their own boxes together,” Merritt said. “I’m hoping to get more exposure in the valley — like I said, it’s amazing how many people still don’t know who I am.”

Merritt has also offers classes on making truffles and chocolate bark and has launched the “Yeti of the Month” club, which allows customers to have their choice of chocolates delivered to their door or to a pick-up location in Wenatchee at a discount.

“I’ve definitely changed some things; I called my first year the year of experimentation,” Merritt said.

One thing hasn’t changed, even after two years: her motivation for making chocolates in the first place.

“I really love making people happy with something that I create with my hands. I love seeing the joy on their face when they take a bite of my chocolate and there’s this euphoria,” she said. “It’s a small thing that makes people feel better and knowing that I’ve done that for someone makes me feel good.”